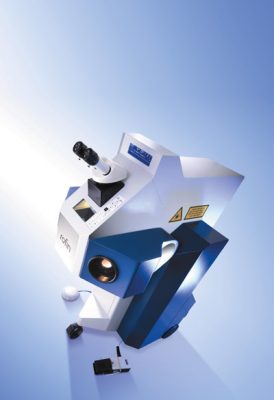 Founded in 1994, the company has continued to build upon a reputation for innovation, combined with classic design and fast, friendly service, to become one of the UK’s largest manufacturing jewellers.

Their reputation for innovation, established early in the company’s history, was further reinforced when Hockley Mint became one of the first to realise the benefits of bonding traditional craftsmanship and skills with new technology, through the introduction of a laser welding system, some 14 years ago.

During a demonstration, arranged for Jewellery manufacturers in 1996, the potential benefits that this new technology could bring to the business became clear.

By the end of the demonstration session, so impressed were the representatives of the company, that the Rofin Performance Laser was purchased there and then and put into production the following day.

The laser quickly became an indispensible tool which transformed the business by significantly reducing the time and effort required to produce or repair items.

Using the laser to tack and pre-assemble pieces, which may comprise of up to 16 separate items, made light work of these tasks, allowing position and symmetry to be checked prior to finish welding or soldering.

The Performance Laser also established itself as the solution to sizing tasks, especially on Platinum rings. The laser welding process produces a finished item which effectively has no joints and a flawless finish. The precision of the laser is ideal for jobbing work, enabling repairs on a wide range of jewellery without having to first remove and then re-set gems. The laser can also effect repairs in difficult to reach areas which would be almost impossible to undertake using traditional techniques.

Fast forward to 2011 and Hockley Mint now has a total of 5 laser systems, three of which are Rofin Performance models. The ease of use, consistency and reliability of the Rofin lasers means that they are always in demand with the company’s 18 jewellery craftsmen who constantly jostle for position to use what has become for them, their preferred welding system.

The combination of the craftsman’s expertise with the power and precision of the Rofin lasers, will continue to bring benefits to both their customers and their business.