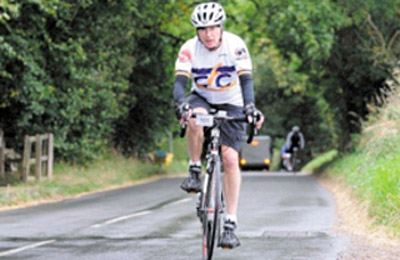 The Company of Master Jewellers (CMJ) proved themselves to have hearts of gold when they dug deep and made a hugely generous contribution to Stratford-on-Avon based Charity ‘Cyclists Fighting Cancer’.

Willie Hamilton and Lucy Hill wanted to salute Michael Allchin’s cycling Sportive. Michael, Chief Executive of The Birmingham Assay Office, achieved his 50 mile goal after a gruelling four hours and 11 minutes battling the escarpments of the Cotswolds in atrocious weather conditions in order to raise money for the charity.

Determined to expose himself to an even longer endurance test Willie Hamilton generously offered to auction himself to work in a business for a whole day. The highest bidder could dictate exactly what tasks Willie undertook, as long as they paid the price.

The auction took place at dinner following the first day of the CMJ’s UK Jewellery Conference, a well paced, highly professional, and positive event. Delegates were fired up, their horizons widened by headline speaker Jacqueline Gold of Ann Summers, motivated by a very worthwhile day and mellowed by good food, good company and the occasional sherbet.

CMJ Chairman Stephen Hughes, backed by the Board, generously gave Michael some time to introduce the inspiring work done by the charity to raise money to buy bikes for children with cancer.

He showed one of the bespoke handmade ‘carer controlled’ trikes commissioned by the Charity at a cost of £1,500. And he showed pictures of the children, triumphantly riding their bikes and trikes. And then the money began to flow. To that point Michael had raised just over £5,000 in four weeks. In the space of 15 minutes that sum suddenly more than doubled.

Several hundred pounds was collected around the room and over £5,000 was raised by Willie who finally accepted bids from not one but the three highest bidders, a fantastically generous gesture. Monique Hirschman of Drakes Fine Jewellers, Peter Andersen of Pandora and Jason Allum of Allum and Sidaway now have the option of making Willie’s day one of endurance or enjoyment but either way it is all for a great cause.

But that was not all. In the course of the auction, Peter Boyle of Argento and a consortium headed up by Melanie and Dominic Wakefield, Gary Williams and Laurie both pledged a further trike at an approximate cost of £1,500 each and Emdico made a significant donation. And the donations came in kind too. Clare and Andrew Rayner, speakers at the Conference and experts in retail, e commerce and social media strategy volunteered £1,500 worth of free consultancy to Cyclists Fighting Cancer to help them with their website, Facebook page and other communications, bringing long-term benefit to the charity.

And finally, all credit to Melanie Wakefield of Wakefield Jewellers who responded to a challenge from CMJ Chairman Stephen Hughes to sing “Diamonds are a Girl’s Best Friend” to him. Already on stage, having just received the CMJ member of the Year award, and with £500 for the charity riding on her unaccompanied performance there was no escape. Thank you Melanie and congratulations to the team at Wakefields.

Michael Allchin was overwhelmed. “We had a great day; we learned a lot, had fun, and raised a huge amount of money. The generosity of the CMJ and its suppliers has been just fantastic. I really can’t thank them enough.”

The proceeds of the Conference were a staggering £6,772 plus pledges for two trikes and free consultancy. This brings Michael’s total fundraising to over £12,000 plus pledges. Just amazing!! If you would like to make a donation to the Cyclists Fighting Cancer fund that Michael has set up please go to http://uk.virginmoneygiving.com/ MichaelAllchin