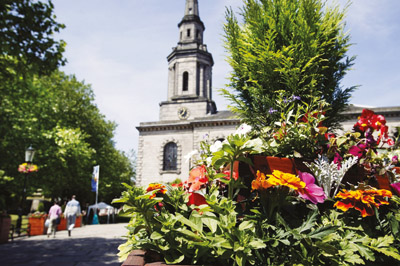 An article recently appeared in the Birmingham Mail regarding parking directly on tombstones in St Paul’s Churchyard.

Euro MP Mike Nattrass, who has a city centre commercial property firm, said that the parking showed a “lack of respect” and has raised the issue with both vicar Rev. Mary Gilbert and Birmingham City Council.

Mr Nattrass, who is UKIP MEP for the West Midlands said: “While I understand the need to manage space for burials, particularly as land for this is under pressure, I find it difficult to accept the disrespect implicit in allowing relocated memorials to be used as a car park.”

Council chief executive Stephen Hughes said: “We have ascertained that to remove and relay the memorials in the grass and then excavate and tarmac over the area will cost in the region of £10,000 to £15,000. Both the council and the church have no funds available to carry out the required work.

The church has agreed that in the meantime they will try to reduce the usage of the area and reduce where possible the need to park vehicles on the area unless they have to in busy periods.”

Editors comment: (Should a Listed Churchyard be turned into a Car Park. There are some cars who park all day in that area, although the church itself is ‘closed’).

What do you think?

‘I am writing in response to the article in the Hockley Flyer, ‘Parking v Graves’. I would like to put the matter straight on a number of points as there are a number of errors in the article and also the situation as a whole warrants explanation.
There is no question of managing space for burials as Mike Nattrass asserts as the churchyard was closed to burials in 1895, at this point the City Council took over the maintenance and management of the churchyard (with ownership retained by the Church). In the early 1970s the Council landscaped the churchyard to turn it into the public park it is today. As part of this procedure they moved a number of gravestones. To do this they would have had to contact any remaining relatives to gain their permission. I can only assume that no one objected to the gravestones being moved. Some of the gravestones were placed flat, where they remain today, in what is clearly a delineated parking area. The truth of the matter is that most of the gravestones were probably disposed of, probably because they were broken or no longer safe.
So the situation of the parking space is one I inherited. This area is used predominantly by small local businesses; we allow them to park there to support the local economy, albeit in a small way. In addition we use that space for disabled parking for concerts and weddings. I would stress that there are no graves under these stones. In fact the graves are under the area where people sunbathe and picnic etc, to which no one objects.
It is true that we do not have the financial resources to remove the gravestones. Like other organisations our financial situation is very difficult in the current climate and we get no outside help, not from the Church of England, the government nor the Diocese of Birmingham – we have to raise every penny ourselves and it costs £1,500 every week just to keep the church open. It is not true that I agreed to limit usage of the area – we need all the space we have, we are a busy working church. Also, two small corrections – the churchyard is not listed, the church is; and the churchyard is closed, not the church.
I do not know what the way forward is at the moment, but it is worth pointing out that in my three years at the church only two people have expressed concern over this issue. We do try to be sensitive to people’s concerns, but we are not just a historical monument, we are a working church seeking to support our community.’