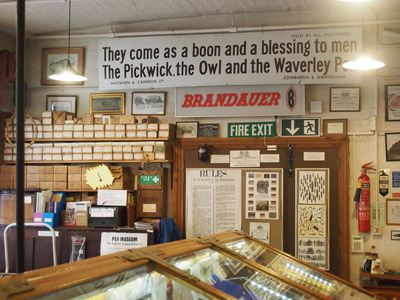 Inside the Pen Museum

The Pen Museum, based in the Argent Centre in Frederick Street has received £90,000 from the Heritage Lottery Fund (HLF) towards a project set to see the museum secure its future and introduce new generations to this largely unknown part of Birmingham’s past.

The project will develop the museum’s spaces and volunteer workforce, and when it opens in August 2016 will include new exhibitions, helping visitors to learn more about this fascinating part of Birmingham’s story, as well as encouraging them to get ‘hands on’ with traditional pens, inks and quills.

Thanks to National Lottery players, the funding will enable people to discover how Birmingham helped to bring writing to the masses around the world and how women played a huge part in the industry.

New volunteers will be welcomed and trained to share facts and stories with visitors to the museum.

The Pen Museum, based in a former pen factory at the Argent Centre, will also be working with its partners Perry Beeches II & IV to develop a schools’ programme to excite local children about writing and to discover how things were done in the days before computers. The Museum’s development will also see it working more closely with Jewellery Quarter neighbours, such as the Coffin Works, in Fleet Street.

Commenting on the award, Alison Ray, Project Co-ordinator said: “We are delighted to have received the support of the Heritage Lottery Fund and are confident the project will lead to a wider understanding of the part the Steel Pen trade played in shaping our City. The increased activities on offer will also mean everyone can have a go at making and using pens.”

About the Pen Museum
The Birmingham Pen Trade Heritage Association is an all-volunteer run charity, established in 1996 and registered as a charity in 1997. The Pen Museum operated by the charity opened in 2001. Around 20 to 25 volunteers operate the museum six days a week.

The Pen Museum tells the story of the Steel Pen trade in Birmingham during the 1800s and the impact it had on its workers, the people of Birmingham and globally. Collections include examples of work from all local manufacturers, specialty items such as musical stave nibs and associated items including inkwells, escritoires and period retail packaging from all over the world. It is the most comprehensive collection of its kind in the country.