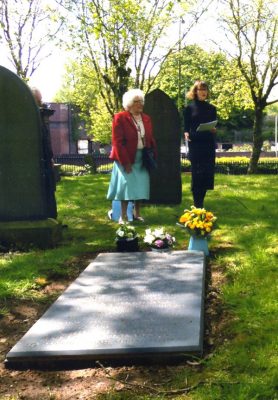 Following a successful fundraising campaign, on Saturday 11 May a re-dedication ceremony was held to mark the installation of Constance Naden’s new gravestone. This was a celebration of the life, works, and legacy of a Birmingham woman at the forefront of female intellectual endeavour at the end of the nineteenth century: a poet, philosopher, and student of science.

Naden’s gravestone in Key Hill Cemetery (Birmingham) was reduced to rubble and buried in the mid-twentieth century. Although excavated by the Friends of the Cemetery in 2010, it remained illegible. In 2017, two of her descendants (Julian Rees and Margaret-Mary Hall) and the leading expert on Naden (Dr Clare Stainthorp) established the Constance Naden Trust to restore the gravesite as a more fitting memorial to this pioneering Victorian woman. Having raised £3240 from public donations, supplemented by funds from the University of Birmingham (College of Arts and Law) and the Grimmitt Trust, a new gravestone was commissioned.

Julian Rees said: “When we started this campaign, we had little idea how many people we would reach or how the idea would resonate. Now that we have raised the funds required and the memorial to this inspiring daughter of Birmingham has been completed, I feel a sense of having achieved something really worthwhile.”
Dr Clare Stainthorp added: “It has been so gratifying to see the public support for restoring Constance Naden’s grave – it is a real testament to the importance of excavating, recognising, and celebrating women’s history.”

Constance Naden (1858-1889) pursued a diverse career before her untimely death aged 31. Her insightful and witty poems and polemical prose drew upon her wide-ranging scientific education at Mason College (now the University of Birmingham) where she was honoured as the first female Associate. One of Birmingham’s most illustrious daughters, in 1890 she was memorialised by a marble bust installed in the Mason College library.

For most of the twentieth century, however, Naden was all but forgotten. In recent years, Naden’s importance has been increasingly recognised; a blue plaque was installed outside her Edgbaston home in 2009 and the first book about her life and works – Dr Stainthorp’s Constance Naden: Scientist, Philosopher, Poet (Peter Lang) – will be published in summer 2019.