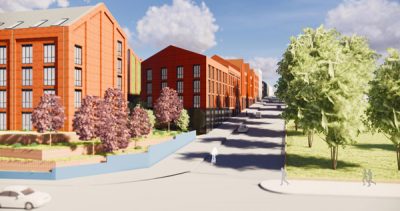 The development would provide 395 one, two and three bed apartments in a series of six linked blocks with a seventh block providing entirely B1 workshop/office floor space.

Within the lower levels of several of the blocks (below street level) and fronting Pitsford Street 10 commercial units at ground floor level fronting Pitsford Street which are proposed to be used for A1- A5 retail purposes. 24 commercial units are proposed overall of various sizes ranging from 41 – 431m2 and several would occupy two floors of accommodation including the proposed D2 gym use.

Most of this would be provided within the 3-storey building at the eastern end of the site which would be entirely for B1 uses, at ground and lower ground floor levels fronting the new areas of public realm and the railway line.