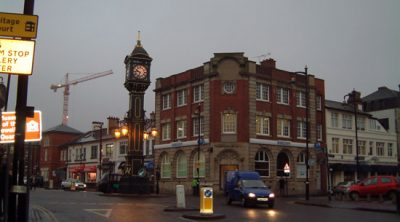 Three new columns will shortly appear, one of which will replace an existing lighting column near to the Clock – (there are two lights very close together at this point). Also new CCTV signs will be fixed around the area (and the existing ones removed!)

The CCTV cameras will be installed and fully operational by the end of June when an official ‘launch’ will be held. With the exception of the camera positioned on the top of the Big Peg (which cannot be linked into the new system), the old defunct CCTV cameras will be removed.

Vyse Street Station
Unfortunately Inspector Warren Hines has now moved on. A temporary inspector (Adrian Wilson) has taken over until a new inspector is appointed. If Inspector Hines reads this, we all wish you well!

Crime Figures
Crime figures are down by 14% on last year although vehicle crime continues to bug the area. It appears that breaking into cars occurs after 6pm and is mainly affecting the residents who park ‘on street’. These break-ins only occur when there is something on show in the car, such a lap-top etc.

JQ Neighbourhood Team
You are now able to TEXT the team with details of any suspicious activity that has caused a minor degree of concern. It is stressed that any incident which involves a crime taking place or significant suspicious activity should be reported IMMEDIATELY by phoning 999 or 112 and this scheme will not replace that.

The phone number for you to TEXT is: 07847811523. This only applies to the Jewellery Quarter area and will not be monitored 24 hours. Please include brief details of the incident and where you are based so that the police can contact you if necessary.