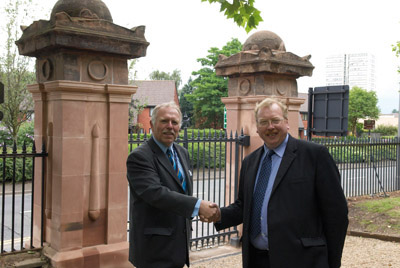 Opening of restored gates and piers to Icknield Street entrance of Key Hill Cemetery by Councillors Summerfield and Douglas Osborn. This was the completion of Phase One – £120,000. Tim Johnson, Regional Director, English Heritage, announced a grant offer of a £150,000 grant towards Phase Two – restoration of second set of gates and gate piers at the Key Hill entrance and production of Conservation Management Plan to inform the future restoration of the cemetery.

The repairs were grant aided by English Heritage together with generous funding from the Big City Plan and Section 106 money provided by local developers. The project was initiated and co-ordinated by the Conservation Team, Planning & Regeneration.

The stonework was in a very poor state of repair due to severe erosion of the sandstone and previous poor quality repairs.

The original brick core of the piers has been reconstructed and new Corsehill facing stone used to the plinth, shaft and architrave. The frieze, cornice and embedded ball finial have been conservatively repaired with an interpretation of the snake of life recreated to one of the frieze faces.

The cast iron gates had suffered from vandalism and one gate had been stolen. The remaining gate has been repaired and a new gate recreated to match.

These works have been successful in reinstating the grandeur and importance of the entrance and to reverse the years of decay. 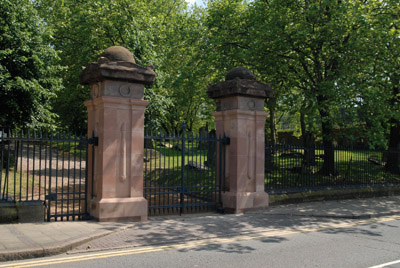 Key Hill History
Key Hill was Birmingham’s first cemetery for all denominations and opened for burials in 1836 as The Birmingham General Cemetery. Many important figures of nineteenth century Birmingham are buried here including Joseph Chamberlain, George Dawson, Charles Edge and John Henry Chamberlain. The original design of the cemetery intended a dual use – quiet recreational use as well as burials.

The gates and gate piers were designed by Charles Edge and were constructed in 1835. The cast iron gates were originally manufactured by Marshall & Son at the Britannia Iron Foundry, Bradford Street.

The gates, piers and boundary wall are listed Grade II and the cemetery is also on the English Heritage Register of Parks and Gardens of Special Historic Interest at Grade II.

The cemetery is a hidden gem situated within the Jewellery Quarter – a conservation area considered by English Heritage to be an industrial area of unique international importance.

The Quarter’s significance lies in its long history as a centre for jewellery and small metalware production carried out in a concentration of converted houses, workshops and manufactories unparalleled anywhere else in the world. It remains a working environment and the City Council is currently considering putting the area forward as a World Heritage Site.

The Future
These works are part of a continuing programme of improvements to the cemetery. Further grant aid has been awarded by English Heritage that will assist with funding the repair of piers and gates to the Key Hill entrance. A Conservation Management Plan is also to be commissioned which will inform decisions on future priorities for the cemetery, its structures and landscape.

Support and many initiatives come from the Friends of Key Hill and Warstone Lane Cemeteries. The Friends are a voluntary group dedicated to securing the future of the cemeteries through practical initiatives such as clean up campaigns, enabling refurbishment of memorials such as the recently completed J. H. Chamberlain memorial and organising open days and special events.

The raising of awareness and promotion of the cemetery together with improving access for all are key to the overall aim to provide a pleasant, safe environment for increased public use and to secure its future.