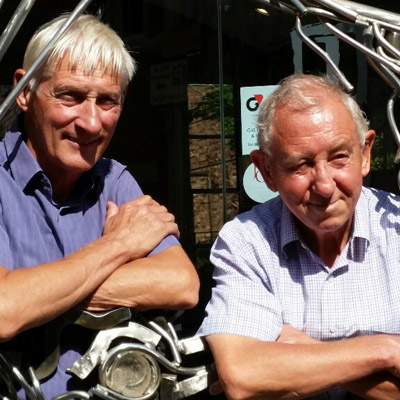 Brothers Dennis and John Freeman have decided to retire after 45 years working together at Yard-o-Led in Birmingham’s Jewellery Quarter, Dennis completing 51 years, and John 45 years commencing in April 1971.

Dennis became Manager in 1980 having succeeded his father, while John concentrated on ‘chasing’ pens; the traditional method of engraving the pattern onto Yard-o-Led Pens, Pencils and Fountain Pens. Still done by hand and eye, John’s individual pattern will be commemorated with a final special edition of 45 Viceroy Grand Fountain Pens, individually signed and numbered.

Both will continue to be busy however; “I plan to spend my time gardening and cooking, which I enjoy and would like to improve on.” said Dennis.

John added “I plan to spend my retirement travelling around the country and hopefully further afield, although knee replacements come first.”

Manufacturers of Fine Writing Instruments, Yard-o-Led’s reputation for excellence and attention to detail spans nearly 200 years. The Company produces Sterling Silver Writing Instruments in The Jewellery Quarter and retails at (among others) Harrods, Fortnum & Mason, Selfridges, Smythson of Bond Street and The Pen Shop, with Distributors in Europe, the Far East and retailers in the United States.

The ‘Yard-o-Led’ brand name derives from the fact that there are 12 x 3” long leads in every propelling pencil – a yard of lead!

Editor’s Note: The Hockley Flyer, on behalf of all the Trade sends best wishes to Dennis and John for a long and happy retirement.