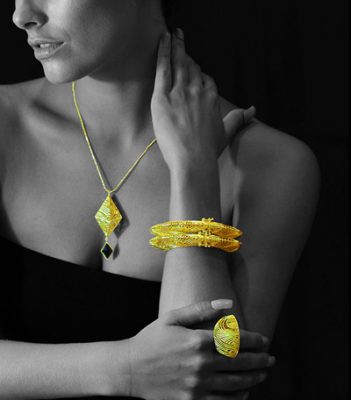 A rising star has settled into jewellery lovers’ views as the London-based Chinese artist, Isabella Liu, reveals her new ‘Sea Rhymes’ collection, which debuted at IJL.

Wuhan-born Isabella Liu is an award-winning jewellery designer. In the few years since leaving Birmingham School of Jewellery, Liu has won awards in Italy and Spain, and has been awarded gold medals at the ‘Jewellery Oscar’ Goldsmiths’ Craftsmanship and Design Award and Milan Expo as ‘the best new designer’ and ‘best product of the year’.

She is proving herself worthy of such awards with her new collection, and showing that she is a permanent fixture in the design world.

Isabella now continues to create wearable concept jewellery like her earlier collections ‘Scar is no more a Scar’ and ‘Mending’, this time inspired by the natural flow and the sounds of the ocean.

Each piece of jewellery holds within it a bead of agate which, when moving, is said to sound like light waves lapping against the shore.

The curves of each work seem to embrace each bead of agate like the ocean envelopes the body. Isabella says that she is inspired by the sea, and says that it reflects something of her own nature that many women will find reflects them.

The sea is calm yet powerful, fluid yet unmoveable, and is something wonderful to behold–much like Isabella’s new designs.

‘I can’t swim,’ Isabella says. ‘I have never been able to swim, so perhaps that is why I revere the ocean: it whispers when it moves, it seems to breathe, and though it is mighty and vast there is something natural and gentle about its embrace when you step into it.’ 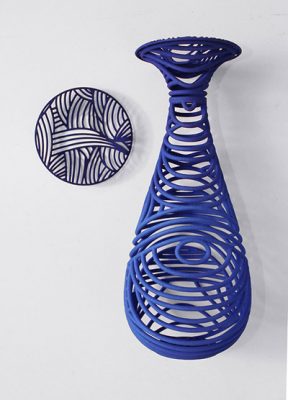 The ‘Sea Rhymes’ collection comes after a period of reflection and learning for Isabella, who has plumbed the possibilities of using computer-aided design and 3D printing to bring this collection into being. ‘Sea Rhymes’ is the result of a successful voyage into creating modern jewellery that still retains an aspect of hands-on crafting.

The intricate lines and subtle curves of the ‘Sea Rhymes’ collection are achieved through a computer-design process and 3D printing, but the smaller elements of each piece is brought together and worked by hand around one solid piece of clear agate to achieve the finished look.

This is something that Isabella considers to be ‘hand-worked craftsmanship battling with high-technology’.

With such fine results, it is easy to see that both can both process can exist alongside each other.

Isabella also has developed object version of ‘Sea Rhymes’, which aims to empower value of the concept and design expression. The object is multifunctional, which can be used as vase, candleholder and lampshade.