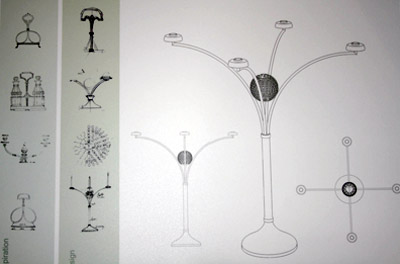 The Birmingham Assay Office has commissioned a piece of silver to commemorate next year’s bicentenary of Matthew Boulton’s death.

Several recent graduates from the School of Jewellery, Birmingham, were invited to submit designs in silver and these were judged by a committee of the Wardens of The Birmingham Assay Office.

The winning design for a candelabrum is by Shona Marsh who says she is thrilled to have won. Candlesticks and candelabra proved a popular line at the Boulton’s Soho Manufactory, and Boulton would undoubtedly have approved of Shona’s design!

Shona worked with the copies of the Boulton pattern books in the Library at The Birmingham Assay Office and visited Soho house for inspiration. The finished piece will be unveiled at the Spring Fair in February next year. It will then go on display at the new gallery at the Museum of the Jewellery Quarter in March.

The bicentenary is fast approaching and plans for celebrations next year will raise the profile of Boulton and his home City. There will be a short exhibition at Christie’s in London, the Victoria and Albert Museum will be staging an event and several National Trust houses that have Boulton pieces in their collections have agreed to join in the celebrations.

Dr Sally Baggott is the Curator at The Birmingham Assay Office.