Home » UK Trade News » Silver with a Pinch of Salt 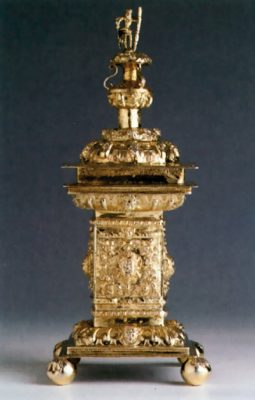 The Goldsmiths’ Company’s spring exhibition ‘Silver with a pinch of Salt’ – A tantalising taste of modern and historic silver for salt looks at the role of silver in the context of the history of salt as a condiment and its place on the dining table.

The exhibition includes important historical silver salt cellars (more commonly referred to simply as salts) alongside a large selection of varied work by contemporary designers and vividly illustrates the different roles and guises silver salts have taken over the ages.

The exhibition is open at Goldsmiths’ Hall from Monday March 30 to Saturday April 25, 2009 and admission is free.

The silver salts on exhibition have been generously loaned by private collectors and institutions, most notably the Royal Collection and the Salters’ Company. A number of salts from the Goldsmiths’ Company’s own collection also feature as do many from contemporary silversmiths. Approximately 180 salts are on display.

The history of salt is as old as life itself and throughout the centuries salt has had both a ritual as well as physical importance. At its most valuable salt was also used as a means of currency – the word salt became synonymous with salary which gave rise to expressions such as “is he worth his salt”?

In the later Middle Ages and early Renaissance, salt was so expensive that only the wealthy could afford it and hence salt cellars, which served a mainly ceremonial purpose, became outward displays of social status and wealth.

One such striking centrepiece featured in the exhibition is the magnificent standing silver gilt salt dating from 1589. Loaned by the Salters’ Company, this piece is one of only a handful of ‘great salts’ still in existence. The finial of the salt depicts a warrior, thought to be Hercules, who would have reminded dinner guests of their host’s immense gallantry. The embossed images of masks and fruit which festoon the salt’s surface reflect the Elizabethan taste for excess, where greater decoration represented greater wealth.

When entertaining this magnificent object would be placed on the table close to the host as a symbol of his affluence and largesse. How close a guest was seated to the salt was also an indication of their own importance – hence to be below or above the salt was a barometer of social standing. It was during this period that the salt became an important item in the silversmiths’ repertoire.

Several of the salts on display at the exhibition feature aquatic scenes inspired by the sea’s unending association with salt. These include a 1742 silver-gilt salt in the form of a crab by Nicholas Sprimont from the Royal Collection and an 1817 salt by Joseph Craddock and William Reid which features silver sea turtles with rococo-style shells balanced precariously upon their backs. The shell motif is repeated in Paul Storr’s merman salt (1811-1813) which depicts Triton, the messenger of the deep, towing a vast shell through swirling waves.

Away from the oceanic themes, other historic salts in the exhibition include a magnificent eagle design made by John Mortimer and John Samuel Hunt in 1841. The eagle is perched upon a rockery base and once again has a shell balanced upon its back. (The natural shape of the shell, ideal for cupping salt, coupled with its links to the ocean, clearly made it an irresistible option for many 19th Century silversmiths.) This eagle salt is another loaned to the exhibition by the Salters’ Company, which, perhaps unsurprisingly, has a number of impressive salts in its silver collection.

Two of the exhibition’s most significant salts date from the 20th Century. First there is Alexander Fisher’s lavishly enamelled octagonal salt, made in 1910, which features eight translucent enamel plaques depicting the Last Judgement alongside the Seven Virtues of Christianity. Second, and standing five times higher than Fisher’s salt, is an imposing 37cm-tall ceremonial piece which was made by Stanley Morris (to Cyril Shiner’s design) in 1951. This piece was commissioned by the Salters’ Company to celebrate the Festival of Britain.

The salt’s elegantly fluted sides and exquisitely delicate engraving make it an outstanding example of 20th century craftsmanship.
The Salters’ also commissioned the esteemed contemporary silversmith Rod Kelly to create a Millennium Salt, the design of which was loosely inspired by the afore-mentioned 1589 Salters’ salt but also incorporates a wide array of modern silversmithing styles and techniques.

Salt today continues to play a part on the modern dining table and contemporary silver salts maintain an outlet for creativity and individuality as is proved by the many exciting and varied examples included in the exhibition.

Carol Mather’s charming silver sculptures of animals – such as a goat pulling a cart with small silver pails for salt and pepper or an ox with his wagon load of salt – follow the tradition of late 19th century novelty salts, many of which featured animals and were designed to amuse the dinner guest.

Many of today’s silversmiths’ combine silver with other materials such as stone, wood or glass to make salts which reflect contemporary interiors, for example Grant Braithwaite uses wood to great effect, while Victoria Kershaw incorporates reconstituted concrete which she softens with a lace motif and Alex Ramsay chooses glass as a complementary medium to silver.

A number of salts have also been designed and made especially for the exhibition by students studying silversmithing at colleges around the country.