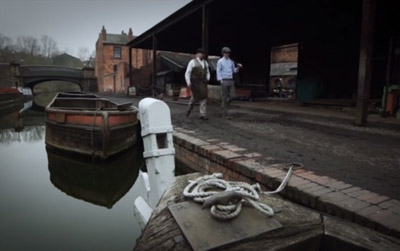 IDM Media, a film production company based in the Jewellery Quarter, has been nominated for an industry recognised Royal Television Society award.

The 2015 Midlands Centre Royal Television Society Awards recognise the best media productions and talent in the region. The film for the Black Country Living Museum, has been nominated for an award in the prestigious ‘Best Factual Programme’ category.

The film is called ‘Black by Day and Red by Night’ and was commissioned by the Museum to give its visitors an introduction to the rich history of the Black Country region.

Laura Wakelin, Director of Communications and Marketing at the Museum said, “The Black by Day and Red by Night film is the focal point of the Museum’s new entrance display.

Not everyone knows the context of the Black Country when they visit the Museum and so the film was produced to give an introduction to the history of the area before visitors go on to explore the Museum. We’re absolutely delighted with the job that the team at IDM did on producing the video and it’s clearly been a hit with the thousands of visitors who have watched it this year.”

The film combined live-action footage shot at the Museum as well as archival stills from the nineteenth and early twentieth century’s. The production also included footage from a recently discovered film reel. IDM Media arranged for the reel to be digitised by the Media Archive for Central England for the production – it included many scenes shot around the Black Country, and had remained unseen for over a century.

Simon Russell, the Director of IDM Media said “It’s fantastic to be nominated for an RTS Midlands Centre Award in the Best Factual Programme