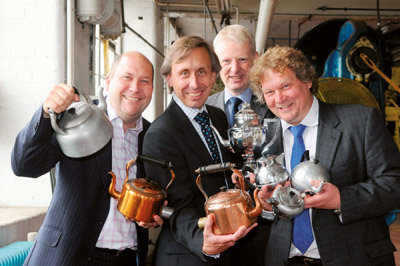 Chord Deeley has kick-started the marketing of its Kettleworks office development with the appointment of GBR and DTZ.

The joint agents will be responsible for securing tenants for the 220,000 sq ft/20,438 sq m premises, which is phase one of Chord Deeley’s £160million St Georges development, the biggest development in the Jewellery Quarter for 200 years.

The developer is to convert the former Swan kitchenware factory in to BREEAM excellent office space, with single floor plates of up to 50,000 sq ft. A fifth floor is planned for the building, which dates back to 1900.

A neighbouring 1950s office extension will be extensively refurbished to complement its Victorian parent, and an adjacent warehouse will be transformed into a multi-storey car park. The space, just ten minutes walk from the city centre, is being offered at £15 per sq ft/£161 per sq m.

A further 42,000 sq ft/3,902 sq m of retail/leisure space will be available on the ground floor of the building, fronting a new public square. The latter will be only the second public square in the Jewellery Quarter and, at 60m x 50m, is equivalent to Brindleyplace’s Oozell’s Square.

The proposed multi-storey will provide 323 spaces for cars, 38 motorcycle slots and 130 bicycle spaces for the Kettleworks.
The St Georges scheme occupies a 2.75 acre/6.8 acre site bounded by Icknield Street, Camden Street and Carver Street. The site also incorporates Moreton Street and Pope Street, where the new square will be located.

The development will create a prominent gateway at the run-down Icknield Street entrance to the Jewellery Quarter, and is one of the biggest regeneration sites in the City. Upon completion it will include a range of office, residential and retail/leisure space, including two new hotels and the multi-storey car park, with workspace for 2,500 people.

GBR’s John Griffiths said: “At £15 per sq ft the Kettleworks fills a major gap in the market for large, affordable floor plates close to the city centre. The life cycle cost model we have undertaken indicates that running costs will be just £1.75 per sq ft per annum. As such, we believe the Kettleworks will be the most cost effective building in the country.

As an office location, central Birmingham can now deliver such a varied range of opportunities. It is not just a high quality business location, it’s a highly competitive one too.”

“The exceptionally high parking ratio at the Kettleworks, and excellent local transport links, including a train station, two Metro stops and major bus routes means it will undoubtedly be on the shopping list of large occupiers and we are encouraged by the initial market response.”

The Kettleworks’ marketing campaign kicked off with a bespoke mailer sent to the City’s office agents, each containing a tea bag. The “Something’s brewing in the Jewellery Quarter” campaign was devised by local marketing agency Barques Design.