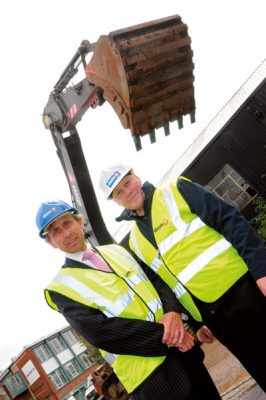 The contract, which will be completed in early September, includes the demolition of the former PCG glass works. The derelict two-storey factory, built in the 1970s, abuts Pope Street, Carver Street and Moreton Street and has been empty for more than five years.

Its demolition will allow Chord Deeley to create a site compound to service the refurbishment of the Kettleworks, the former Swan kitchenware factory, which is being transformed into 220,000 sq ft/20,438 sq m of BREEAM excellent office accommodation.

The works are the first phase of Chord Deeley’s £160million mixed-use St Georges scheme, which will include office, residential, retail and leisure space, two hotels, a multi-storey car park and a new public square.

St Georges will occupy a 2.75 acre/6.8acre site bounded by Icknield Street, Camden Street and Carver Street, creating a prominent gateway at the run-down Icknield Street entrance to the Jewellery Quarter. It is one of the biggest regeneration sites in the city.

Peter Deeley at Chord Deeley said: “We have already begun internal stripping out works at the Kettleworks, but before we can begin the refurbishment and extension to the exterior we need to create service space for the contractors.

The demolition works signal our intention to get this prestigious project on the move and return this run-down corner of the Jewellery Quarter back to viable and attractive employment space.”

The Kettleworks is being marketed by joint agents DTZ and GBR. Single floor plates of up to 50,000 sq ft will be available, with rents from £15 per sq ft/£161 per sq m. With running costs of £1.75 per sq ft per annum the developer claims the Kettleworks will be the most cost effective building in the country.

The Kettleworks’ refurbishment is scheduled for completion by autumn 2010. Further development of the site will be phased over the next 3-5 years. Chord Deeley is a joint venture between Jewellery Quarter-based developer Chord and Coventry-based national developer Deeley Properties.