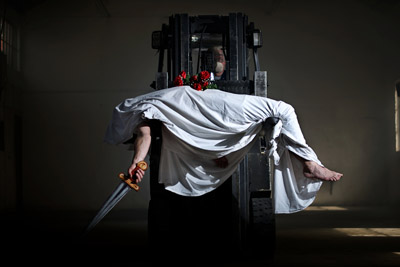 Cheekily retitled Twilightofthefreakingods, Stan’s Cafe’s reinterpretation of Wagner’s stirring epic – a battle between humans and Gods inspired by Norse mythology – is described by the company as “a large-scale theatrical experiment” as the story unfolds simultaneously over 255 minutes across three performance spaces totalling 2,000 square metres.

Filled with subtle echoes from previous Stan’s Cafe shows, this unique site-specific production will be performed just twice by a cast of 13 who, without any rehearsals, will work from individual instructions and timetables. Unlike conventional scripts, these will not include dialogue, and each actor will only see their own specific directions.

With raked and cabaret styled seating available and a bar open throughout serving flaming cocktails as well as snacks and more familiar drinks, audience members can choose how to watch the show.

“It should be an extraordinary occasion,” says Stan’s Cafe’s Artistic Director, James Yarker. “We’re planning it all out very carefully on a giant spreadsheet but ultimately no one can be sure how it will work until it’s happening. We hope the audience will feel free to move about and choose which of three parallel performance spaces to watch at any given moment. One thing we’re sure of is that afterwards the audience will be able to relish saying “I was there then it happened!”

Instead of Wagner’s music the performance will be accompanied by a new live soundtrack by Nina West (The Cleansing of Constance Brown). Time manipulated videos of the show will be edited by Reel Access for a 2014 screening as part of Flatpack.

Although Stan’s Cafe are remaining at, and continue to produce shows at, AE Harris, Twilightofthefreakingods will be the final performance in the larger 2,000 square metre space.

Twilightofthefreakingods is produced in association with Reel Access and Flatpack.