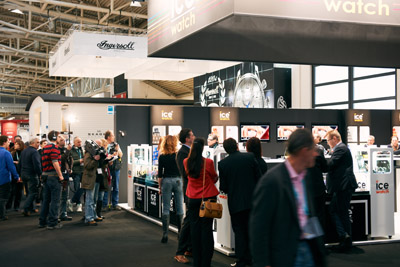 Exhibitors at Inhorgenta Munich turned over more than 60 percent of the watches sold in Germany in 2012.

This is what follows from the current projection by GfK, the market research institute. At 14.7 percent, the quantity sold by these brands increased considerably compared to the previous year.

Inhorgenta Munich again asserts its claim to be one of the world’s leading trade shows for jewellery, timepieces and lifestyle and a significant factor in the business performance of the brands represented there.

The current study by GfK on developments in the jewellery and watch sector clearly shows that the exhibitors of Inhorgenta Munich come off very well in a Germany-wide comparison, especially in the starting and mid-price ranges.

With over 60 percent of the watches sold in Germany, the manufacturers who exhibit at Inhorgenta Munich attained growth of 14.7 percent compared to the year 2011. This value is far above the average growth of the total quantities turned over in Germany, which registered 6.5 percent in the year concerned.

“On the basis of these figures, we are pleased to see that our exhibitors play such an important role and that Inhorgenta Munich can make a contribution to this”, explains Renate Wittgenstein, Product Manager of Inhorgenta Munich. “Due to the early date of the trade show, many of the deals for the current year are done at Inhorgenta Munich.”

The average price of watches at jewellers and specialized watch dealers in the year 2012 was EUR 291. In the non-specialized trade (incl. department stores and mail-order companies), the price was around EUR 74.

For 2013, the industry expects a slight increase in the average prices. As GfK confirmed in a report on the occasion of Inhorgenta Munich 2013, growth in 2012 was most pronounced in the area of unisex watches with a plastic strap. The price segment between EUR 75 and 150 grew by 17 percent, far more sharply than the Germany-wide average.

“Inhorgenta Munich serves as a platform for the entire sector from starting price ranges right up to top luxury products with the focus on affordable luxury”, says Renate Wittgenstein. “The current figures confirm that by setting this priority, Inhorgenta Munich has taken the right course.”