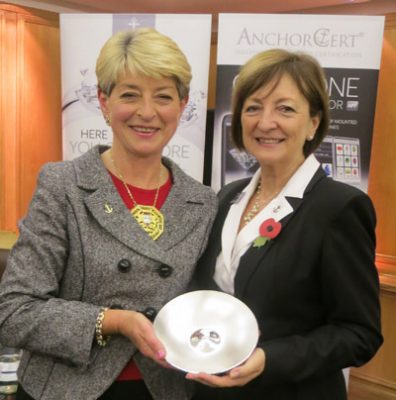 Kay Alexander was given a warm vote of thanks by her colleagues when she formally stepped down as Chairman of The Birmingham Assay Office at her last Annual General Meeting on Friday 19th October.

Kay has served two three year terms in the post, the maximum allowed, and has presided over The Birmingham Assay Office during one of its most challenging and eventful periods.

As hallmarking volumes decline rapidly due to the high precious metal prices and tough economic climate these new divisions are increasingly important and are reaching out into new market sectors.

During this diversification Kay has been a key part of the strong marketing drive to raise the profile of The Birmingham Assay Office throughout the jewellery industry and also within academic and heritage communities. Kay is a staunch supporter of Birmingham’s Jewellery Quarter and has been influential in promoting the Quarter throughout her term of Office.

Chairing her final AGM Kay expressed her huge pride in having led The Assay Office during the past six eventful years. She thanked her team of Wardens for their tremendous support and Michael Allchin for his leadership and commitment to bringing The Assay Office through tough times in good shape.

Kay leaves her post with plans submitted for a new building which will allow the new divisions to continue to expand, securing the future of one of Birmingham’s oldest institutions. Kay will remain in post as a Warden in the short-term to maintain continuity and will be succeeded by Kate Hartigan, Managing Director at Schaeffler UK Ltd, who will legally be appointed Chairman at the next Wardens’ Committee meeting in November. 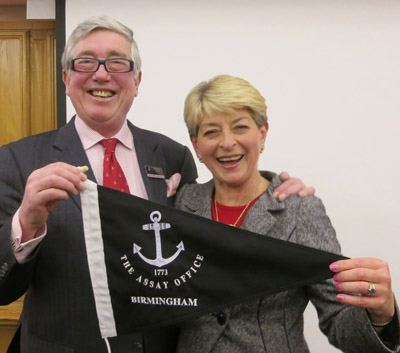 Friday was also the last meeting for well-respected jeweller Patrick Fuller, who with his wife Vivien owns WB The Creative Jewellery Company.

Patrick has been a Trade Warden of The Birmingham Assay Office for 16 years and his first hand knowledge of the jewellery manufacturing business has been invaluable to the Office. Kay expressed her huge gratitude for the contribution Patrick has made to the Office and her pleasure that he will continue to serve as a Guardian.

Emotions were running high throughout the meeting and peaked when Kay was presented with a silver bowl – a replica of the one she gave to Her Majesty the Queen to mark her Diamond Jubilee- and a photobook recording a few of her moments as Chairman. S

ailing enthusiast Patrick received a customised Assay Office “burgee” for his sailing boat, so he can continue to fly the Anchor flag around UK and international waters and also a set of suitably nautical cufflinks. He retaliated by presenting The Assay Office with one of three real ship’s anchors that he has purchased especially for the new Assay Office building.