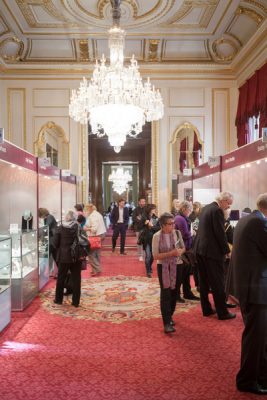 Among the many distinguished attendees were Their Royal Highnesses The Duke and Duchess of Gloucester who visited in Week One and spent a couple of hours talking to some of the younger exhibitors and those who had been granted a Free stand by the Goldsmiths’ Company as part of its Bursary scheme.

Attendance was marginally up on the previous year but more importantly the total spend was higher than Goldsmiths’ Fair 2011 (a 5% increase) with a large number of the exhibitors (90 in both weeks) reporting very buoyant sales, some had their best Goldsmiths’ Fair ever.

Paul Dyson, Director Promotion, the Goldsmiths’ Company, said: “The Fair results were most rewarding for both the Company and the individual craftsmen. Together we were able to demonstrate that the “green shoots” of recovery are flourishing. Our clients are very loyal and it is a pleasure to see them return with friends every year.”

Martyn Pugh, who has now exhibited at each Goldsmiths’ Fair since the very beginning, added: “Even at 30 years old, the Fair still has considerable pulling-power and remains the country’s most high-profile and prestigious event of its kind – both from the exhibitors’ perspective and the general public’s”.

He continued: “In my opinion one of the most successful aspects of the Fair is the fact that over three decades it has not only been the place to buy refreshingly original designer pieces directly from the makers, but it has also served to educate potential collectors. Today its audience continues to be ever more knowledgeable and discerning.”

Another silversmith Graham Stewart and long-standing Fair exhibitor said: “When I first started exhibiting at Goldsmiths’ Fair I would never have imagined what a major part it would play in my career, not just in terms of introductions to clients from all over the world but as a stimulus to my artistic development. It is a veritable hot-house of creativity.”

Among the new exhibitors was Charlotte de Syllas, a doyenne of the British art jewellery movement, renowned for her carved gemstone work, many of which are to be found in distinguished collections around the world. She described her first experience of the Fair as a “resounding success.” Having previously worked entirely on commissioned, bespoke jewellery, the reaction to her new one-off pieces was extremely encouraging. Working in
such a sophisticated and specialised area Charlotte felt that if any lessons were to be learned she will now rise to the challenge of making smaller, more affordable pieces to attract a wider range of collectors.

Similarly first-time exhibitor Leya Abdollahi felt her experience to be positive and productive, although she, like Charlotte, felt she could have had more jewellery in a more inclusive price range. Exhibiting at the Fair also brought it home to Leyla how important and influential an event it is.

Another new jeweller to the Fair, Lucie Gledhill, who wasn’t even born when Goldsmiths’ Fair started, was also delighted with the enthusiasm with which her work was received. Her main success was selling her hand-made 3 metre long silver graduated chain weighing 1.4 kilos of fine silver, using the traditional technique of wire-pulling.

Also new to the Fair was Jasmin Rowlandson, who had recently received an Arts Council grant to undergo a period of research and development. This culminated in her first jewellery collection which she launched at the Fair. Jasmin, who originally trained as a sculptural ceramicist, now uses porcelain as well as precious metal clay interwoven with precious stones and freshwater pearls. She said, “Goldsmiths Fair was the perfect environment for my debut showing. It enabled me to introduce my work to new audiences, build up my client base, and forge relationships with galleries, curators and my contemporaries.” 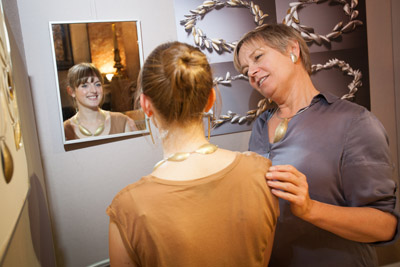 Thirty years represented the Fair’s “Pearl Anniversary” so it was reassuring to note that the enduring pleasure found in these lustrous, natural gems remained much in evidence. Jane Sarginson, renowned for her sumptuous pearl jewels, said: “I had a strong interest and sales in all types, most notably the lovely dark Tahitian pearls, as well as the pretty mixed colour baroque freshwater pearls for bracelet cuffs, long necklaces, and drop earrings.” Eric N Smith also sold many South Sea and Tahitian pearl necklaces with his signature hand-made clasps.

On the silver front there was a forceful showing of dynamic, exciting work. For example Ray Walton found his new range of silver boxes fusing ancient fossils into contemporary craftsmanship to be in great demand. He said, “People loved the combination of the very old with the new and being able to have an input into the choice of fossil and the ultimate design of the box.” Needless to say Brett Payne’s statement candlesticks which offer infinite possibilities of use and configuration, as well perfectly complementing both traditional and ultra-modern interiors, proved extremely popular.

To prove that silver can be used for all sorts of creative outlets, silversmith’s Carl Padgham and Andy Putland had an impressive solid silver whisky still complete with in-set lighting to show off that very special bottle of whisky, as well as a silver encrusted roulette wheel, while Justin Richardson displayed his new sleek silver desk-light base. At the other end of the spectrum there were all sorts of original silver Christmas decorations which proved exceptionally popular most notably Rajesh Gogna’s highly original Christmas orbs, with hand-engraved detail to catch the light and add extra silver sparkle to the festive tree.

As is the tradition at Goldsmiths’ Fair, a prize for “Best New Design” was awarded in both weeks. Peter Ting who closely scrutinised the work and designs of the first 90 exhibitors in Week One, chose recent graduate silversmith Max Warren as the winner of the “Best New Design Award.” Peter said, “Max not only demonstrates superlative craftsmanship skills but his silver is highly original. His work is so precise and exacting that it looks as though it has been made with the help of technology but in fact is all hand-made. When so many craftspeople today use modern technology I find this fabulous juxtaposition and reversal an exciting element of Max’s work.”

Jacqueline Gestetner judged the exhibitors in Week Two and selected silversmith Adi Toch as the winner. It was Adi’s deceptively simple yet sophisticated oil and vinegar vessels that won Jacqueline over. Designed as two separate rounded vessels which function perfectly well individually, they also “snuggle up together” giving the appearance of a single entity. Jacqueline said; “Adi’s silver appears effortlessly simple but is technically perfect. Its appeal also lies in the fact that it is always charmingly witty and playful as well as extremely functional.”

Two out of the ten recent graduates, who had all been given a free stand, a bursary and a precious metal loan from the Goldsmiths’ Company, Maud Traon and Goldsmiths’ apprentice, Kerry Seaton remarked how the Fair introduced them to a great range of potential clients and how the feedback they’d received about their work was hugely beneficial and instructive. Kerry said, “I realised that all the visitors are hugely interested in the trade and eager to understand how we, as craftspeople, go about producing our designs, and what influences our creations. People clearly really appreciate creativity and craft.”

In turn the Goldsmiths’ Company intends to uphold the great tradition and integrity of Goldsmiths’ Fair for years to come, as well as continuing to provide new opportunities for craftspeople and collectors alike such as the new Goldsmiths’ Company Pavilion** which takes place at Somerset House in June.