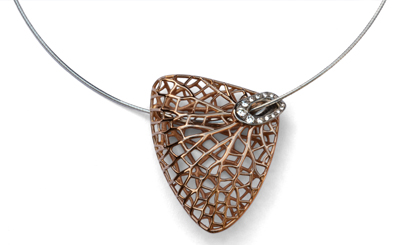 ‘Botanical’ pendant in 18ct gold produced by Weston Beamor, from an original design by Joe Jackson.

Weston Beamor will be showcasing some examples of its technical, manufacturing prowess at this year’s International Jewellery (Stand G141). On display will be jewellery 3D printed and cast by the company for student designer Joe Jackson.

Joe who recently achieved a first class honours degree from Birmingham City University came to WB for assistance with creating his Botanical pendant and earring designs.

The company was pleased to provide, not only 3D printing, but also the metal to make the jewellery in 18ct gold. The resulting highly-complex pieces when shown at the New Designers exhibition in June took the eye of the designer Shaune Leane who has now offered Jackson a job.

Other highlights on the WB stand will be an exhibition of over 50 entries received for the company’s ‘Cheeky Chimp’ photography competition, launched at Spring Fair Birmingham in February. These can also be viewed on the company’s Facebook page (www.facebook.com/westonbeamor).

The photographs all feature resin chimpanzees created using WB’s sophisticated 3D scanner and Viper 3D printer, which the company gave away to visitors of the show. So far the chimps have travelled as far afield as Iceland, been snapped relaxing in the bath, and riding an open top bus in London! 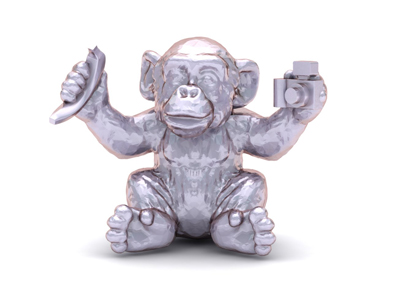 The most original and interesting picture received will win its photographer a Samsung Galaxy Camera while the runner up will receive a pair of sterling silver chimp cufflinks. There will be further free, chimp models available at IJL for those still wishing to enter.

But hurry, the competition closes on 31st October. For those interested in seeing the source of these tiny simian creatures, WB will also be showing its high-tech 3D scanner at the show and its expert team will be happy to discuss how visitors can use this for their own design and manufacturing purposes.

A further attraction will be some exciting and imaginative pieces of silverware from the prize-winning student designer Hamish Dobbie who scooped The WB prize for innovative use of CAD at this year’s New Designers’ Exhibition.