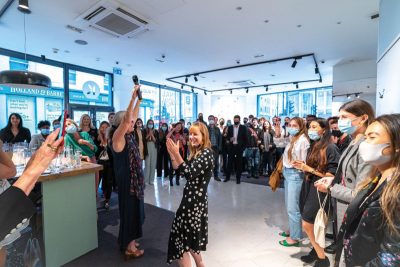 From the awards ceremony.

The British Academy of Jewellery is thrilled to announce the names of the students who won awards at the opening night of the Final Show 2021 in London. Hosted at cultural hotspot and exhibition space KOPPEL 540, this year’s Final Show features pieces produced by some of the most talented jewellery students at our London campus over the last 12 months, and its opening night saw the distribution of a total of 11 prizes.

The Alighieri Mandala Award for Level 3 Diploma students was won by Audrey Ravello, whose prize includes an afternoon studio experience at renowned London-based jewellery brand Alighieri and a piece of jewellery from one of their collections. Alighieri also awarded Harvey Berkeley-Hawkes ‘Highly Commended’ for his creation.

Winners of technical awards included Panayiota Savvides, who took home the Martin J Prinsloo Award for Precision in Technical Excellence and claimed the “Lone Star of Texas” amethyst as her prize, and Tianne-Louise Simmons, who won the 77 Diamonds Award for Excellence in Finishing and £500. The AE Wards Prize for Stone Setting was won by Dylan Panikkar, who received a stone worth £200.

The Gemvision Excellence in CAD Award went to Sean Reilly, who claimed six months of free access to the MatrixGold CAD software and free online training as his prize.

Awarded by the Ash & Stones Jewellery and Carolina de Barros brands, the Rising Star Award was received by Lucie Rickwood. Her prize was a mentoring session with Ash & Stone, a £150 HS Walsh Voucher, a VIP ticket to the Jewellery Cut and a beautiful gemstone.

Dorottya Viktoria Feher achieved the Fuli Gemstones Award for Creativity & Colour and took home a peridot stone, while another student claimed the Alkemistry Award for Timeless Luxury, winning a Luxury Piercing Experience at the Alkemistry store in Covent Garden.

The Maitland Woodall-Mason Award for Most Improved Student was awarded to two students, Neo Tabaku and Mohamad Reza Salili, who will each be given a free place on a BAJ short course of their choice.
Finally, the Kim Joux Award for Power of Originality was taken by Arpaporn Schuler, who has secured two weeks of work experience at London’s award-winning Kim Joux jewellery brand, while Kitty Konsta achieved the Jewellery Cut Award for Professional Jewellery Product, claiming a VIP ticket to the next Jewellery Cut event. 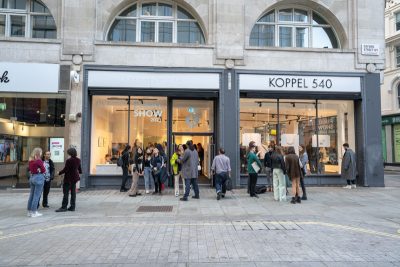 Attended by BAJ staff and students, and key jewellery sector figures, the opening night of the Final Show 2021 in London was an unparalleled opportunity to showcase the work of our talented community to the industry. VIP attendees included British Vogue editor and international jewellery authority Carol Woolton, who gave a speech and presided over the award ceremony, and judges, including Rosh Mahtani, Martin J Prinsloo, Tom Ward, Graham Dicks, Susanna King, Eleanor Jackson, Pia Tonna, Kirstie Gibbs, Trang Do, and Andrew Martyniuk.

“I am so proud of everything that our students have achieved over the last year, and it’s wonderful to be able to share their talent and creativity with the wider jewellery industry through our Final Show 2021,” said Kate Rieppel, Head of Academy at the British Academy of Jewellery.

“The past 12 months have presented a lot of unexpected challenges, but our students have still been able to spend time at the bench and have continued to wow me with their determination and technical skill.”
“To win an award. It’s next level,” said AE Wards Stone Setting award winner Dylan Panikkar.

“It feels nice to be appreciated for the work that you’re doing. Especially because I haven’t been in the jewellery industry for long, so it’s nice to see that the work I’ve been putting in for the last two years catches the eye of people that have been in the industry for ages. And it’s very gratifying to know that.”