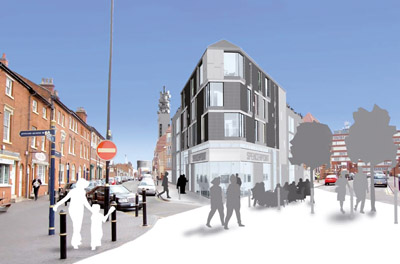 The Jewellery Quarter Association is backing proposals for a route within the Quarter to celebrate Kathleen Dayus.

Many of us remember Kathleen who passed away just short of her 100th birthday. Kathleen was born at the time of the Boer War when the Quarter was a city slum and a manufacturing area. She grew up in the slums and eventually established her business in the Quarter.

Her autobiographical books are heart-warming and tear-jerking in chronicling a century of life in the Quarter with the ‘memory of the sights, sounds, and smells of her youth’.

Nearly all the places and buildings referred to in the books still remain and the descriptions are so evocative that you get a real sense of the life of the Quarter in its manufacturing heyday and why the area is still so ‘special’ to us all.

The Girl from Hockley (Virago) has been read on BBC Radio 4 as ‘Book of the Week’ and is on the school syllabus. Consultants have already looked at the possibilities and have suggested that Kathleen could come to mean to the Quarter what James Herriot means to the Yorkshire Dales!

A trail is always helpful for visitors to find their way around and particularly useful in the complex layout of the Quarter. The Dayus Trail will start by the old fire station in Albion Street and pass along Tenby Street, Warstone Cemetery to the station in Vyse Street, and Hockley Street than back to the Chamberlain Clock, along Frederick Street, Legge Lane and finally to the old Fire Station again.

The route will include the street where she was born, her school, sites significant to her family, places she worked, various pubs, shops and the sites of scrapes and brawls as well as showing off some of the ‘best bits’ of our Quarter.

Art work will follow the route and sponsorship by Chord Developments has already been arranged for some plaques at important locations. Two squares are proposed at either end. The first, Albion Square, will hopefully combine with the refurbishment of the George & Dragon – which regularly crops up in Kathleen’s books as she ‘rescues’ her father!

At the other end of the Trial a new square, Dayus Square, will be created outside the Jewellers’ Arms which is close-by the low and high points in Kathleen’s life. It was in Hockley Street where she harrowingly ‘put her children up for adoption’ and the Square is in front of a new building on the site of where Kathleen established her business just after the Second World War.

Following the Parkinson Report, which looked at the future of the City, squares are be due to pop-up all over Birmingham and The Jewellery Quarter Association is lobbying for ‘us’ to have ‘our’ fair share. Parkinson says ‘Squares …… are not hard or expensive. Birmingham should commit to creating many more and using Section 106 agreements to fund them.’

The JQA is still in touch with Kathleen’s family who are very supportive and although things move very slowly in Birmingham, there is agreement that The Dayus Trail is a good idea and it is now one of the Regeneration Company’s priorities of spend from coffers of ‘our’ Section 106 planning gain collected over the years and allocated to the public realm in the Quarter.