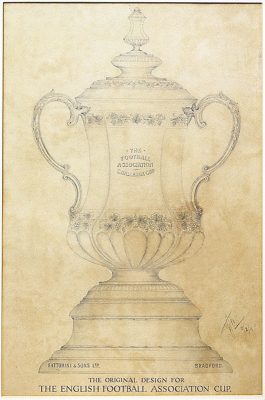 The item in the October issue of the magazine caused quite a sensation and also prompted an extremely interesting item from Tom Fattorini, which we have pleasure in reproducing here:

The committee of the Football Association at their meeting on Monday (4th December 1911) accepted the registered design of Messrs. Fattorini & Sons Ltd. the well-known jewellers and silversmiths of Bradford out of an enormous number of designs and models (over 150) sent in by the largest firms in the Kingdom for the new Cup to replace the trophy which has done service for so many years and which was presented to Lord Kinnaird on Monday.

The new Cup stands 19” high, exclusive of plinth is classical in style and bears the Title ‘The Football Association Challenge Cup’.

This Challenge Cup is actually the 3rd Cup. The first was in 1872 when the Wanderers beat the Royal Engineers in front of a crowd of 2000, was stolen in 1895 when put on display in a Birmingham bookmaker’s window after Aston Villa had won.

The replacement replica was presented to Lord Kinnaird to mark his 21 years as President of the F.A. The ‘Fattorini Cup’ was made in 1911 at a cost of 50 guineas. The design was filed and copyrighted and the F.A. had to pay a fee for its use.

The original winning design of the 1911 FA Cup still exists today. It was returned to Fattorini and Sons in Bradford with the initials of Sir Frederick Hall, the Secretary of the F.A. at the time to indicate his approval.

Fattorini and Sons were well known jewellers and silversmiths based at 21Kirkgate. They subsequently established a factory in Birmingham in 1915 in Pitsford Street, the ‘Joseph Moore’ works. Later on, they moved to Barr Street where Thomas Fattorini Ltd bought them out in 1984.
There has been much speculation as to where exactly the Cup was made as it was hallmarked in Sheffield, but it seems likely it was made in Bradford where it was also subsequently engraved with all the competition winners’ details etc.

‘Tony’ Fattorini and Olympic timekeeper and sports fanatic and member of the family was instrumental in the formation of Bradford City AFC having overseen the change from rugby to football.

It was said to be a fitting result for Bradford City to win the new FA Cup in its first year as Tony Fattorini had initiated a fitness training programme for the players which had given them the edge for the replay in the final against Newcastle at Old Trafford.

Mf TRF FA Cup – new challenge cup
Recently the ‘Fattorini’ F.A. Cup was taken to the Royal Hall in Harrogate for a valuation by Gabby Logan and Eddie Gray the F.A. Cup Winner (1972) and was aired in March 2016. The silver expert, Alastair Dickenson valued the Cup at over £1 million pounds, the highest valuation he had ever given until that time.

He also speculated that the Cup was originally a wine or champagne cooler on account of the Bacchanalian elements that decorated the bowl which he felt did not represent football in any way.

he programme was seen by a football fan who alerted Mr Tom Fattorini who knew of the whereabouts of the original design and was able to bring it to a subsequent Antiques Roadshow held at Baddesley Clinton in 2016 where Fiona Bruce was able to show it to Alastair Dickenson and prove his original remarks were wrong!

Alastair commented, “If you are going to get something wrong – do it spectacularly!”
The ‘Fattorini’ FA Cup was retired after 80 years of wear and tear after the 1991FA Cup Final. Subsequent copies were made, and the design is still in use today.