Home » Heritage » The Four Museums of The Jewellery Quarter 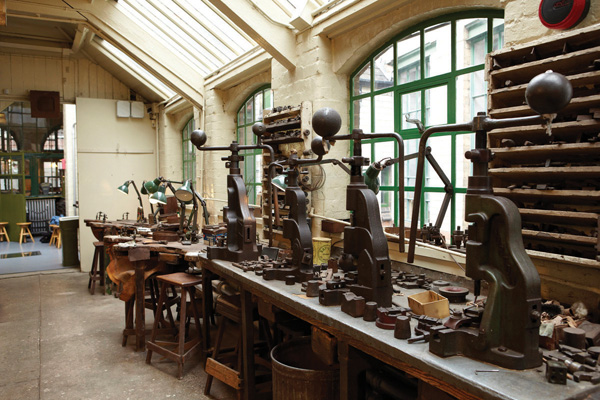 Birmingham’s Jewellery Quarter surely has the most exclusive collection of Museums in the world, and all within easy walking distance of each other.

English Heritage Grade II Listed all the buildings housing these Museums under the Jewellery Quarter Conservation & Management Plan to protect the buildings from demolition or inappropriate use.

Each Museum is unique and well worth a visit whether you live or work in the area or a visitor/tourist or intending to purchase jewellery or gifts.

Museum of The Jewellery Quarter – ‘Marie Celeste’ Comes Back to Life’

75-80 Vyse St, Birmingham
Source: Hockley Flyer No 84 1992
‘A jeweller’s workshop, silent and untouched for nearly ten years will re-awaken soon when the Jewellery Discovery Centre (later re-named Museum of The Jewellery Quarter) opens at 77/79 Vyse Street. These premises were occupied by Smith & Pepper which began making gold jewellery in 1899 and closed down in 1981. When the doors were locked for the last time, all the company’s papers and craftsman’s tools were left lying just where they were put down. For nearly 10 years the benches lay undisturbed.

Birmingham’s City Council restored the old building and its contents to working condition. Before it could do so, some 70,000 items had to be photographed, catalogued and removed for safe keeping, to be put back to exactly the right place after building work had finished.

The adjoining building has been turned into a visitor centre where displays tell the story of the Jewellery Quarter and introduce the raw materials of the trade – gold, silver and diamonds – and the skills of the jeweller. In the old workshops local people will demonstrate some of those skills, many of which have remained unchanged since man first began working with precious metals thousands of years ago.’ 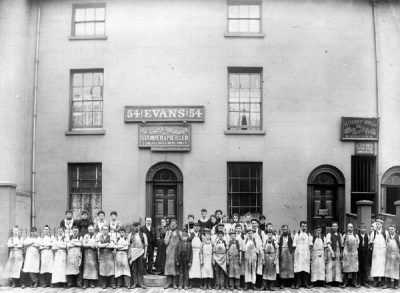 54/57 Albion Street
‘The firm of J W Evans was founded in 1880 by Jenkin William Evans. He completed his studies at Birmingham College of Art in 1875, and many of his examination design papers are still in the company archive. His occupation was described as Diesinker.

The initial activity of the company was the design and production of dies and tools as a service for other manufacturers in the jewellery and silverware industry. Drop-stamp machines and presses were later installed to prove the dies and provide an initial sample batch. The range of products grew rapidly. to which the company responded. New dies were produced at an average rate of 246 per year over the 14 years from 1896 to 1909, peaking at 334 in 1904.

Initially 54 Albion Street was rented. Mr Evans and his wife Louisa lived there and raised their family of three children, Harold, Elfrida, and Austen. When the opportunity arose later, the block of four houses from 54 to 57 was purchased.

In 1901 the family moved to Middleton Hall Road in Kings Norton, Mr Evans travelling to Albion Street in a horse-drawn carriage and wearing a top hat. During the day the carriage was kept in the garage at 53 Albion Street, the horses feeding from mangers on the wall.
The bay windows were probably added to the properties about 1900. Mr Evans’ elder son was taken into partnership about that time, changing the name to J W Evans & Son.

In addition to producing so many designs over the years, the company also purchased dies and tools from older companies which had closed down. On two occasions about 25 years apart, dies were purchased at auction where the lots included dies which had originally belonged to Matthew Boulton. They had been dispersed when his company had closed many years before.

Jenkin Evans died in 1928 and is buried in Warstone Lane cemetery. The company continued with Harold as Managing Director until 1951, when Austen took over.

During both World Wars the company was busy producing parts for munitions and military equipment, including many components used in early RADAR.

The large collection of dies and tools for the manufacture of reproduction antique table hollowware has remained intact; the company continued producing items which originated well over 100 years ago with the same high standards of quality.

The business remained in family control and Anthony Evans and Peter Lawden joined in the mid 1950’s, John Evans (4th generation).
The production of high quality silver and silver-plated tableware continued until it was purchased by English Heritage, who has since turned the factory into a Silver Museum after intervention by Marie Haddleton (Jewellery Quarter Heritage Consultant)’. 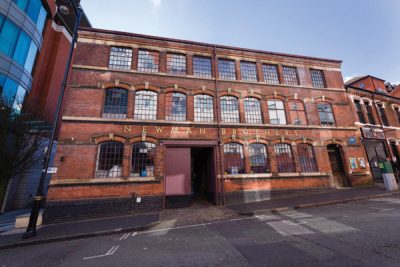 13/15 Fleet Street
In 1998 Newman Coffin Works was empty and deserted and Marie Haddleton made the Conservation Advisory Committee aware that this was a ‘special’ building, being a very rare example of a late 19th Century purpose-built metal-working manufactory that was operated by a family firm for over one 100 years and produced highly specialised products. (Established in 1884 by Alfred and Edwin Newman, moving to Fleet Street in 1894 just 10 years later.

On this initial visit the building was found to be fascinating but rather ‘spooky’ – everything was left around as if the workforce had just gone to the canteen for a cup of tea and were due back at any time. The sewing machines still had cotton on the reels, and one could see shrouds of every description for the deceased’s family to select from, depending on their former interests/hobbies – e.g. materials in the colours of Aston Villa Football Club were still on the cut-out table.

After a long discussion with Ms Green, (owner of the buildings and contents), negotiations began, to turn the building into a ‘museum’ with enough workspace created ‘to let’ to help finance the project.

The Conservation Committee included representatives from The Birmingham Civic Society, The Victorian Society, the 20th Century Society, the JQA, top COB Conservation Officers and other conservation-conscious people. English Heritage became particularly interested and immediately added the building for Grade II Listing under the Jewellery Quarter Conservation and Management Plan to protect the building from demolition, or inappropriate use.

The project was funded by English Heritage, Heritage Lottery Funding, Birmingham City Council plus many more organisations, and is now managed by Birmingham Conservation Trust.

Ms Green was thrilled with the ideas being put forward and it is a great pity that she died in 2009 before the project was completed.
In 2015 The Newman Coffin Works were awarded the RICS West Midlands Award in the category ‘Buildings, Conservation, Tourism, & Leisure.

Website: www.coffinworks.org
Opening Times: We are open Wednesday to Sunday, but open on bank holidays. Doors open 10.45am. Tours on the hour at 11am, 12 noon, 1pm, 2pm and 3pm. Last entry 3pm. Admission to the museum is by guided tours only. Tours are limited to 15 people at a time. You are welcome to just turn up before a tour, but we advise that to avoid disappointment, you reserve a space by phone: 0121 233 4790 or by email: 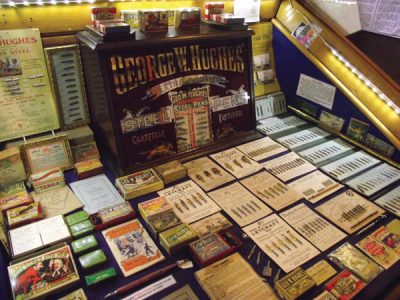 The Argent Centre – 60, Frederick Street
Birmingham was the centre of the world pen trade for more than a century, employing thousands of people, and pioneering craftsmanship, manufacturing processes and employment opportunities for women. The availability of cheap pens enabled the development of education and literacy throughout the world.

Brian Jones (together with his colleague Colin Giles) first had the idea to open a Museum so that this important phase of the Jewellery Quarter’s history should not be forgotten. The venue appropriately chosen was in W E Wiley’s former factory – Albert Works (now The Argent Centre) – as they were the largest pen manufacturer in the world.

Events at the Pen Room include a library and archives, learning centre, talks and presentations, calligraphy and writing classes, school visits and family activities.

Website: www.penmuseum.org.uk/
Opening Times: Tuesday to Saturday 11am to 4pm (Sunday 1pm to 4pm). Last admission is 45 minutes before the museum closes