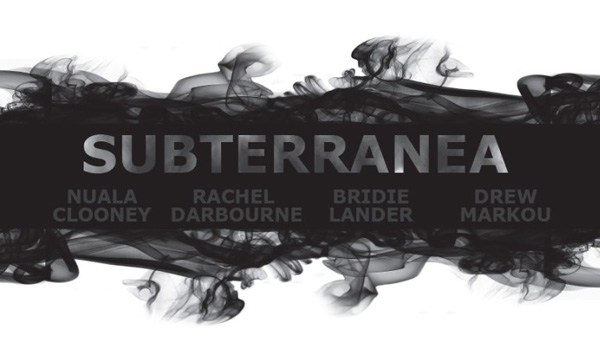 What lies beneath is the subterranean. It’s the dark, the buried, the out of sight.

In their individual ways each of the members of Subterranea is engaged with the buried, the stuff that lies beneath, be it literally or metaphorically.

Subterranea is an ongoing collaborative conversation between Nuala Clooney, Rachel Darbourne, Bridie Lander and Drew Markou. Together they explore the overlapping processes and shared research territory in their individual practices.

Alongside displaying work, the artists explore how to reveal the usually hidden conversations and processes of both the individual creative journeys and the development of the collaborative practice.

The audience is invited to participate in the opening and closing events and engage with the work. Interaction by audience, participants and the artists throughout the time of the exhibition will result in a continual evolution of the space, encouraging new narratives and interpretations.

Rather than seeking to show a concluded body of work, the show puts emphasis on the process, the journey, revealing the normally unseen side of an artists’ practice and so poses the question is anything ever finished?

During the evening, biting, chewing and consuming, normally a private activity that takes place inside the mouth’s cavity, becomes externalised and public. Performing bodies and tools taking on the role of the mouth as they bite into a table consisting of a pink mucous membrane.

The audience will be served sweet mouthfuls of this continuous surface, a surface that becomes’ passed on and into others and has a new form of existence.
The resulting piece will become a new video work that will then be projected onto the remaining table throughout the course of the exhibition.

Closing Event | Thursday 12th April 6pm – 8pm
Join Subterranea for an intimate and interactive walk around the exhibition with the artists. We seek to provide you with a deeper sensory and tactile experience of the work on show by offering you an opportunity to taste and consume a selection of edible, sumptuous and sweet morsels, each inspired by the artists’ work.

Drew Markou creates forms that at once look futuristic and archaeological artefacts, unlocked from the earth they were cast in. While his process is methodical the outcomes rely on a certain happenstance, a synchronistic event and the final outcome enticingly unpredictable until they are revealed after the sand-casting process. The resulting artefacts aim to explore notions of belonging, purpose and existence.

Drew is a lecturer based at Birmingham School of Jewellery. His current research seeks to examine the synonymic links between creation within religion and that within his own studio practice.

Rachel Darbourne taps into our childish affections and the recesses and transgressions that may linger there.

The familiar cuddly toys, the transitional objects are distorted and transmuted into uncanny, titillating tactile furries that tickle at the boundaries of innocence and other – the stuff that lies just below consciousness.

Rachel is a maker, what she makes reflects her perceptions of and confusions about the world, the people in it, the politics, the psychology, the philosophy, and the seemingly existential predisposition to violence. She is Pathway Leader for Jewellery at Plymouth College of Art.

Nuala Clooney is a cross disciplinary artist who boldly recasts the body, her body, creating part body, part objects that lie in the space of self and other.

She explores the sensuous fluids that interplay and intermingle self and other, the dark viscous spaces between felt and feeling. Nuala is currently undertaking a year-long residency at Grand Union Birmingham developing the experiential and performative aspects of her practice.

Bridie Lander through the use of black, black glass mirror, black enamel, and a menagerie of other material hints at the mystic; the alchemistic; the dark arts.

The black reflective surfaces play with the parallels of the ubiquitous black glass of our mediated technological times with the notions of scrying or Claude glass.

Bridie is a senior lecturer at the School of Jewellery interested in the effect of digital technology on material culture, she draws analogies between studio practice and alchemic process.