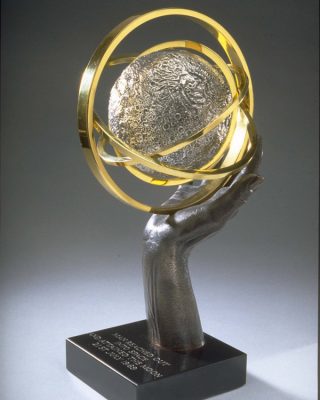 In 1971, two years after the USA put men on the moon, The Goldsmiths’ Company commissioned Anthony Elson to create an extraordinary piece. Known as the ‘Moon Trophy’ the commission was completed to commemorate Sir Alan Herries Wilson’s time as Prime Warden from 1969-1970.

The trophy, which stands at 38.7cm high, depicts a hand reaching out toward a magnificently modelled, oxidised, and electroformed moon, hand sand cast in silver.

Surrounding the moon are silver-gilt rings, set in gimbals, allowing freedom of movement, reminiscent of the command module’s orbit, piloted alone by Michael Collins, awaiting the return of Neil Armstrong and Buzz Aldrin. Supporting the extended hand, moon and silver-gilt rings is a black Belgian marble plinth, mirroring the darkness of space and mankind’s ambition to explore it.

Not only is the sentiment a fitting commemoration of Past Prime Warden Sir Alan Herries Wilson, a pre-eminent physicist who laid the foundations for today’s current understanding of microelectronics, but also for the extraordinary accomplishment that was Apollo 11.

Rarely does an object manage to communicate the importance and gravity of both the person and the mission.