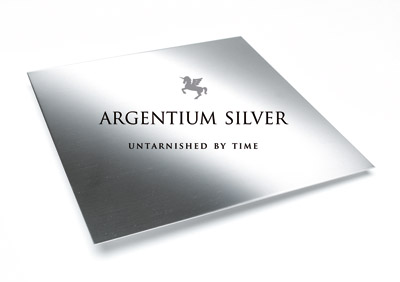 On 27th November 2008 London saw the worldwide launch of Argentium 970-Pure Silver, which, with its ‘magic’ ingredient Germanium, sets a new standard in the purity, strength and tarnish resistance of silver for use in jewellery, watches and silverware.

The British discovery is set to have the greatest impact on the jewellery and silver industry since the introduction of the sterling silver standard in 1720.

The revolutionary new silver has already been commissioned in a limited edition unique silver straw designed by Theo Fennell and in a new collection of silver jewellery by Eternal Silver. The collection is available in the UK in partnership with the world’s largest jewellery retailer.

The worldwide patents for Argentium 970-Pure Silver are owned by the British company Argentium International, which was established in 2007 to market the first premium silver brand worldwide.

According to Chief Executive Officer Richard Leyens, demand is so great that the company is working with its industry partner Cookson Precious Metals to step-up production.

“Some of the world’s leading luxury brands are working with us to create new products for launch in 2009,” said Leyens. “Silver jewellery sales have previously increased in times of economic downturn. With Argentium 970-Pure, consumers now have access to the world’s first premium branded silver and this is proving a very attractive proposition for the jewellery and silver industry around the world.”

In a recent independent study by the UK’s gold, silver and platinum standards regulator, The Worshipful Company of Goldsmiths, Argentium Silver “showed no visible tarnishing in the standard tarnish resistance test.” The study concluded that Argentium Silver “can be successfully used in the workshop to produce jewellery and silverware that has better tarnish resistance than conventional sterling silver.”

According to Steve Ramsay, CEO, Eternal Silver London, the unique properties of Argentium 970-Pure Silver, will see it replace sterling silver over the coming decade. “The white lustre of Argentium Silver is greater than any other expensive precious metal and its strength and tarnish resistance makes our jewellery far more resistant, even in its every day use, than standard sterling silver.”

Argentium 970-Pure Silver has been previewed at the world’s leading jewellery shows in the US, Hong Kong, Switzerland and Thailand to significant acclaim. For more information about Argentium Silver go to: www.argentiumsilver.com