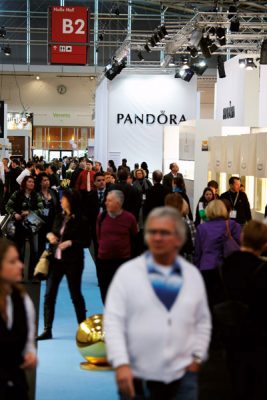 From February 19th to 22nd, inhorgenta europe 2010 once again validated its role as the jewellery and watch industry’s trend barometer.

Thanks to its schedule early in the year the exposition is considered one of the world’s leading trade fairs for jewellery, watches, gemstones, pearls, and technology.

This position was further highlighted by this year’s annual CIBJO congress, held at the same time in Munich as the 37th inhorgenta europe.

With considerably more than 30,000 visiting industry professionals from 84 countries inhorgenta europe experienced a growth of close to 15%. Approximately one third of the visitors came from abroad, which represents an increase of about 2.5%.

In addition to Germany, the countries with the largest visitor delegations were Austria, Spain, Italy, Sweden, Switzerland, Greece, the Netherlands, as well as Great Britain and Ireland.

The atmosphere in the exposition halls was very positive, particularly due to high ordering activity thanks to considerably reduced stock levels among the jewellery and watch retailers at the end of 2009. Yet also the extensive, high quality product selection gained a lot of appreciative attention.

The results of the poll held by TNS Infratest at the same time as the trade fair also confirm the very positive progress at this year’s event: 42% of exhibitors polled (compared to 33% last year) rated the industry’s current economic situation excellent or good; 80% (56%) believe that this will also apply for future market development.

Klaus Dittrich, Chairman of the Management Messe München GmbH: “We are very pleased with the excellent run of inhorgenta europe 2010, which even exceeded our own expectations.

The strong increase in visitors shows clearly how attractive this exposition is for the industry. inhorgenta europe is the fourth Munich based event in a row experiencing a considerable increase in visitors. inhorgenta europe was able to further expand its position as an important European retail platform. Together with the industry we will continue to consistently strengthen this position in terms of strategic goals as well as content.”