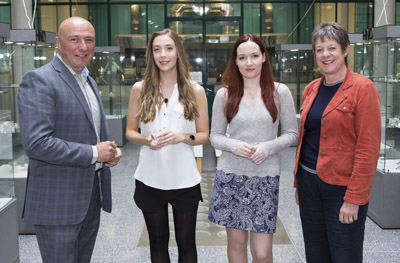 The Benevolent Society (previously the British Jewellery Giftware & Finishing Federation Benevolent Society) is pleased to announce that it has broadened its remit for charitable support to include young people who are about to enter careers in the jewellery sector. In a move announced recently, Annabel Large and Ruth Hallows (two students from Birmingham’s prestigious School of Jewellery) have been awarded bursaries to cover their fees for progression to the next stage of their courses.

After a process of competition and interview, Annabel (who had worked for many years as a dental technician before deciding to re-train as a jeweller), has been granted £9000 to progress from Higher National Diploma (HND) to the BA Jewellery Design for Industry, and Ruth has been granted £6000 to progress from the first year of the HND to the second year; these are two of the most traditional craft-based courses at the School of Jewellery.

These bursaries are the first of their kind and are the pilot scheme which sees an expansion in The Benevolent Society’s remit from not only caring for those who have retired from the trade (or who have been forced to leave because of ill health) towards help for nurturing young people entering the trade.

The Benevolent Society is excited and pleased to be working with the historic School of Jewellery and hopes that the strengthening relationship between the two organisations will continue to grow.

Trustee of The Benevolent Society, Gary Wroe of Hockley Mint and Joint Deputy Chairman of the National Association of Jewellers said of the award:
“In changing and challenging times, The Benevolent Society has been through a significant strategic review to ensure that we are supporting the people in the industries we represent. The Society can, and will, make the difference, not only to look after people who have fallen on hard times, but also to develop and grow talented people. We would like to thank all of the companies who continue to support us and wish Ruth and Annabel long and happy careers.”

Both selected students are adults returning to education after a break in their careers and whilst support is often available for younger people, this bursary has been designed to assist people between the ages of 23 and 34 who might not be able to progress without financial assistance;