Home » Property » Ugliest Building to be Made Good Again 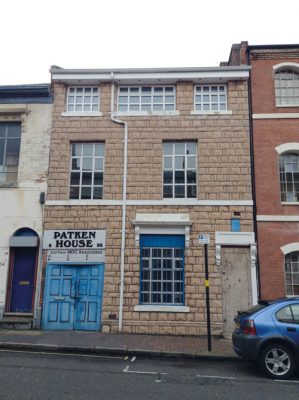 For nearly a quarter of a century No. 36 Hylton Street has been known as ‘The ugliest building in the Jewellery Quarter – this is because the owner at the time Bracelon Ltd covered the frontage in stone cladding, which was quite ‘trendy’ at that time.

However, Neil Smith of R J Smith (31 Northampton Street – previously Tenby Street North) has recently acquired this building for restoration/redevelopment and has told The Hockley Flyer that as part of the restoration, he intends to remove this cladding.

Neil Smith commented to the Hockley Flyer on 2 November 2017, as follows:

‘”We purchased the property in July 2015 and began looking at restoration and acquiring planning permission for its conversion into six self-contained office suites in 2016. We appointed Graybuild Ltd, based in Halesowen, as the contractor earlier this year and work commenced on October 1st, 2017.

The original plan was to bring symmetry back to the building by adding and relocating all the windows to the front aspect, but unfortunately structural restrictions uncovered during the internal demolition work has meant that we cannot achieve our original goal. However new timber sash windows and some re-alignment will restore the building closer to its original design.

The most important thing is that the awful ‘Coronation Street’ style cladding will be removed in the next couple of weeks and replaced with a rendered finish which will then bring the whole building back into line with the general Hylton St. and Jewellery Quarter street scene. We were hoping to restore the original brickwork but fear that it has been ‘scored’ beyond repair during the application of the cladding.

We have undertaken additional internal structural work in order to achieve six open plan offices whilst working around the integral framework of the building and trying to retain as many original characteristics as possible, such as original brick walls and fireplaces.

The property is lucky enough to enjoy quite a large courtyard at the rear of the property, overlooking Key Hill Cemetery, which we are landscaping and making accessible to all units.

Although we will not be relocating our family business into any of the units itself, Hylton St is where I began working in the school holidays for my father, Raymond Smith, over 40 years ago at the tender age of 11 years old, so it is quite nostalgic for me.

The project is likely to be complete by February 2018.”