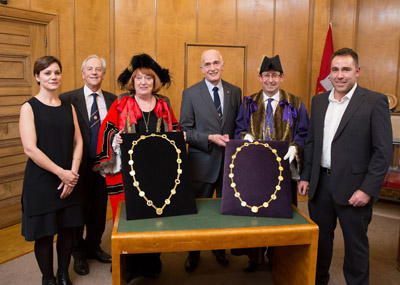 Sara Sweet (far left) and Craig Snape (far right) of Sonkai with the Mayoral party at the presentation of the new chains which was held in Norwich on 13th October.

When jewellery retailer Sonkai won a competition to design and make chains of office for the Lord Mayor and the Sheriff of its home city of Norwich, it turned to Weston Beamor for assistance with the 3D Printing and casting elements of their production.

The finished articles, which were commissioned by the Freemen of the City, were presented in a special ceremony held at the Civic Office in Norwich on 13th October.

The chains, which are the first to have been commissioned by the Freemen since 1757, were required to provide a more practical alternative to the extremely heavy and very valuable and traditional gold chains which have been worn by the City’s dignitaries for generations.

“We currently have a female mayor and she was finding that the historic chain was simply too large for a female frame and too heavy to wear for long social engagements. Quite apart from that, the old chains were felt to be simply too valuable for everyday use.

The brief for the competition was to design and make something which could be worn by people of either gender and of different statures, which would be more practical but still look impressive,” explains Susan Blackler the in-house designer for Sonkai which in addition to selling British-made contemporary and designer jewellery has its own workshop offering bespoke designs and a full repair service. 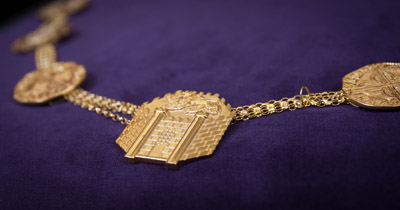 A close-up of one of the 18 disc motifs.

Working with her fellow designer, Mallory Wilkinson, and the owners of Sonkai, Craig Snape and his partner Sara Sweet, Susan Blackler came up with a highly unusual and extremely practical design which uses interlocking disc motifs in gold-plated sterling silver.

These can be linked in a variety of ways so that the chains can be worn in a single 56” loop or as a shorter single or double-layered chain. The two chains required no fewer than 400 individual solders to assemble them and the finished pieces weigh 335g and 305g for the Mayor’s and the Sheriff’s respectively.

The eighteen intricate motifs, most of which are used in the Mayoral chain, feature highly detailed images, each representing significant cultural aspects of Norwich’s long history. The motif designs are based around ancient coins from the local museum, Norwich Castle, canaries (these were first brought to the city by the Huguenot refugees who founded its prosperous weaving industry), dragons (the city has links with these mythical beasts that go back to the 14C) as well as leather goods, shoemaking and other items of historic interest.

“The discs, which are 35mm across, tell a story and have been designed to provide an excellent talking-point when the chains are being worn. It was therefore essential that the castings should be crisp and clear and the fine detail portrayed in my CAD drawings be clearly visible. We were absolutely delighted with the clarity and quality that Weston Beamor achieved,” says Blackler.

“Weston Beamor is often asked to cast and to make interesting objects but this job from Sonkai is certainly one of the most fascinating. It was also technically challenging so we are very proud of the results we achieved and are delighted to have been able to play a small part in such an historic project,” commented Glen Day, Business Manager at Weston Beamor.

Own brand jewellery
Weston Beamor is now working with Sonkai casting the retailer’s own-brand jewellery collection which launched earlier this year. They will also work with them to create a cuff for exhibition next year featuring the 10.5ct golden beryl gemstone cut by award-winning gem cutter John Dyer which Blackler received having won the Gem-A Gem Empathy Award design competition at this year’s show.