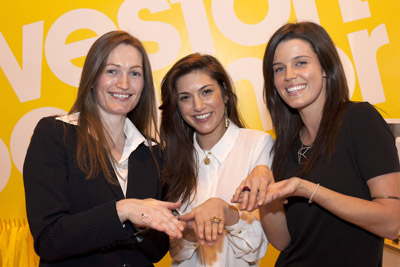 Roxanne Moznabi (centre), winner of the annual Weston Beamor student design competition celebrates her win with Claudia Noble (left) who was second and Joanna Gordon who was third. The three, all of whom are 2nd year HND students at The School of Jewellery in Birmingham, are wearing their winning ring designs.

On Tuesday 5th February students from the School of Jewellery at Birmingham City University (BCU) gathered on Weston Beamor’s stand at The Jewellery Show Birmingham to hear the company’s managing director, Andrew Morton announce the winners of the company’s annual design competition, in conjunction with BCU, which has now been running for eleven years. Announcing that Roxanne Moznabi had won with her contemporary trilogy ring design in 18ct yellow and red gold, Morton said:

“This was an outstanding year and we had difficult decisions to make. In past years any one of the three finalists could have won, however Roxanne’s design really captured all our imaginations.”

Moznabi’s inspiration focused around the three meanings of the Zoroastrianism religion – good thoughts, good words, and good deeds. The design has a luxurious quality and holds some of the Persian influence from the route of her initial design exploration.

The three winners, all of whom are in their second year of study in an HND Jewellery and Silversmithing Course, win (respectively) £500, £250 and £100 plus a week of work experience at Weston Beamor. 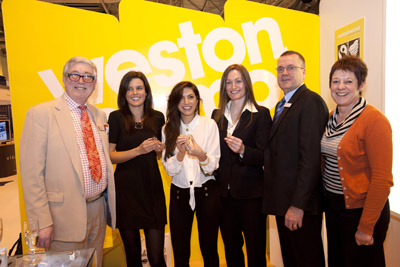 From left to right: Patrick Fuller, Chairman of WB The Creative Jewellery Group is pictured with BCU students Joanna Gordon, Roxanne Moznabi, Claudia Noble, Andrew Morton, managing director of Weston Beamor and Gaynor Andrews, from The School of Jewellery in Birmingham. The picture was taken during the prize-giving ceremony for Weston Beamor’s annual student design competition which was won this year by Roxanne Moznabi. Claudia Noble was second and Joanna Gordon third.

Speaking about her win Roxanne, who had already completed a 3 ½ year jewellery apprenticeship with Timothy Roe Jewellers in her home town of Chichester before beginning her course, said she was shocked and excited to have won: “When I was working I did a lot of repair work and commissions but I suddenly realised I really wanted to make my own designs and if all goes well I would like to have my own business.

Hopefully winning this competition will help me realise my ambition,” she commented. Speaking at the prize giving, School of Jewellery Course Tutor and Deputy Head of School, Gaynor Andrews said she would like to thank everyone at Weston Beamor for the opportunities which the competition had opened to her students.

“The WB team provided all those who took part with brilliant support. Everyone has learnt a great deal and I know the experience and the knowledge gained is something that will be useful and will remain with them right throughout their careers,” she said. P

rototypes of all three short-listed designs were produced by the Weston Beamor’s CAD and new product development team and were on display on the company’s stand at The Jewellery Show where they drew much favourable comment from visitors.