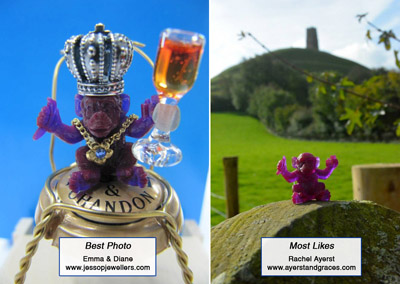 Weston Beamor, the Birmingham casting house and 3D printing specialist, has announced the winners of its long-running photographic competition.

Emma Anderson and Diane Mckenzie of the Scottish jewellery retailers Jessop in Fife have won WB’s own prize for their image entitled ‘King of Bling’; while Rachel Ayerst owner of Ayerst & Graces, an independent jewellery retailer from Street in Somerset has scooped the Prize for the ‘most liked’ image chosen by those visiting the company’s Facebook page with her ‘Chimp on Tor’.

The competition which was launched at Spring Fair Birmingham in February 2013, to coincide with the arrival of WB on Facebook, invited participants to photograph 1” high resin models of a chimpanzee, created by the company on its high-tech Viper 3D printer, in the most imaginative way they could with a view to winning a Samsung Galaxy Camera.

“It looked like such fun,” says Diane Mckenzie, repairs manager at Jessops. “Emma and I wanted to use some of our stock if we possibly could and to dress him up so he would stand out. In our winning picture he is actually wearing a Pandora charm crown on his head and looks so splendid we christened him ‘The King of Bling’.”

Rachel Ayerst, who is a customer of Weston Beamor’s sister company Domino and trained as a jeweller at the nearby Birmingham School of Jewellery, spotted the competition whilst browsing on Facebook and was particularly taken by the idea suggested on the site, of the chimp going on tour and being photographed in exotic locations.

“I love puns – indeed my shop’s name is a pun on my own name ‘Ayerst’ and ‘Airs’ as in ‘Airs and Graces’ – so when I saw the word ‘tour’ I immediately thought of the nearby Glastonbury ‘Tor’ and the winning picture was actually taken there. It’s fantastic that I’ve won because I haven’t got a nice camera and was thinking of buying one for Christmas,” she commented.

Speaking for Weston Beamor, Glen Day, the company’s head of new business development, said, “We have been absolutely knocked out by the response to this competition. We’ve given out literally hundreds of chimps and have had well over 60 entries – which can still be viewed on our Facebook page (www.facebook.com/westonbeamor) The chimps have travelled the world and their antics and costumes have kept us all amused. It has been so much fun and above all else has really flagged up the tremendous creativity of our customers.”