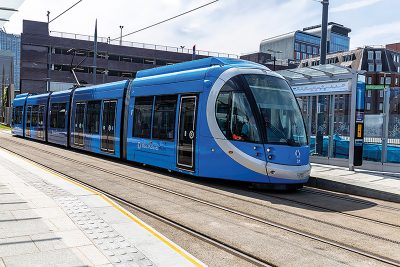 Metro services were suspended from 20th March due to an operational issue. During inspections, new bodywork cracks have been identified on some of the older trams which require additional checks to be carried out by the manufacturer.

Meanwhile, Metro tickets and passes will be valid on the alternative modes of transport detailed below:

Works to restore the West Midlands Metro services have been progressing and are now expected to resume passenger services by the end of May 2022.

Alongside the manufacturer, CAF, have now completed a detailed assessment of the tram fleet and begun a schedule of works to replace cracked body panels that will enable trams to return to service as quickly as possible.
Midland Metro Limited (MML) has required the manufacturer to replace the panels rather than repair the existing ones to ensure the future reliability and robustness of the service.

While works are well underway at the Wednesbury depot, further steps are being taken to accelerate the repair programme, including securing additional ‘off site’ workshop facilities. Further details of where trams may be sent for repairs will be confirmed in due course. In the meantime, additional engineers from across the UK and overseas that have the necessary skills to carry out these specialist panel replacement have also brought in
‘Another new tram being cleared for operational service after successfully completing a thorough testing and commissioning programme as we strive to rebuild fleet availability. Our new tram fleet continues to be tested and will be running through the network to ensure they are ready for when the service recommences.’

‘Once again, we would like to apologise for the ongoing inconvenience and share the frustration of our customers at this suspension in services.’