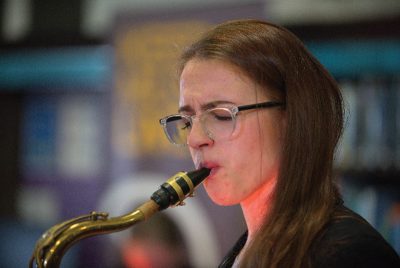 Somewhat surprisingly, the 36th annual Birmingham, Sandwell & Westside Jazz Festival delivered 10 exciting days of live jazz and blues from October 16 to 25 in what was almost certainly the only live music festival to take place in the region – and probably further afield – since the coronavirus struck in March.

With all venues and participants strictly adhering to government guidelines, venue capacities were seriously reduced, but nevertheless most of the 43 performances attracted full houses.

Postponed from the original July dates, when we presented a 10-day virtual Jazz Festival, the appetites of both the audiences and the musicians for the live music they had been long starved of was obvious. Trumpet ace Bruce Adams told his opening night audience at Velvet Music Rooms “I’ve been practising for this gig for 350 or 400 hours” – and it showed in his tremendous performance.

The festival printed programme subsequently underwent 24 alterations which did cause some confusion which the audiences bore stoically, so relieved they were to actually have ten days of live music to hand.

The forced changes included having to replace seven performances of The Jim Dandies from Bassano del Grappa when Italy was put on the quarantine list only two days before the festival, and, 24 hours later, Tipitina from Leyland pulled out when Lancashire was placed in Tier 3. This caused a few furrowed brows, but the festival remained on track with 49 musicians, 43 performances over the 10 days – all but 2 of them free admission.

Venues ranged from Birmingham Markets, when three bands played to the backdrop of a Pop-Up Record Fair, to bigger pubs, shopping centres, the rural splendour of the Botanical Gardens and the unusual settings of Sandwell’s West Bromwich and Wednesbury Libraries where multi-British Jazz Award winners Alan Barnes, Bruce Adams and Dave Newton played without audiences.

Performances were filmed and streamed online and direct to Festival venues with audiences, including The Brasshouse, The Bulls Head and 4 retirement homes.

In actuality, the Festival remained in danger of being forced to cancel right up until the 48 hours prior to the launch, and we feel it is a credit to the venues, musicians, sponsors and all concerned that we were able to deliver a milestone 36th year of this important Festival.
So, here is to the next edition from July 16th to 25th 2021’.

More Information:
The Festival might be over, but many performances can still be enjoyed online at www.birminghamjazzfestival.com/streams