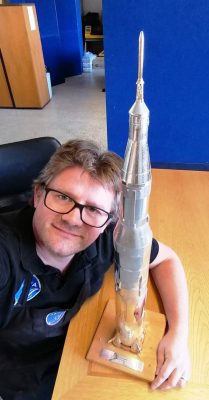 ‘During my short stint before I was recalled as a one-man band with the rest of my team furloughed, I finished a personal project that has taken me about two and a half years…. a 2.5-foot-tall almost 3kg silver Saturn V moon rocket!

I have been obsessed with astronomy and human space flight ever since I was a small boy and spent most of my primary school days dreaming of becoming an astronaut. As a keen model maker and engineering enthusiast I have always wanted to build something like this in silver so when about three years ago I was offered a job lot of old scrap silver by a friend who had inherited it, nothing interesting or rare, I paid a fair price and exchanged it for casting grain to begin producing the components for the rocket.

It is a replica of a 1:144 model kit. It has taken so long because most of the sections had to be cast in individual cans and I had to save up each time to be able to afford the cost. 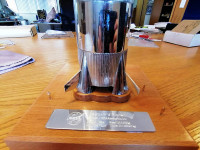 I did not think that I would be finishing it until mid-next year, not only because of the cost, but because I am a busy factory manager with an (up until Lockdown) rich family/social life. However, the Lock down initially gave me some spare time which enabled me to get it done’.