Home » Local News » A Message from The Lord Mayor of Birmingham 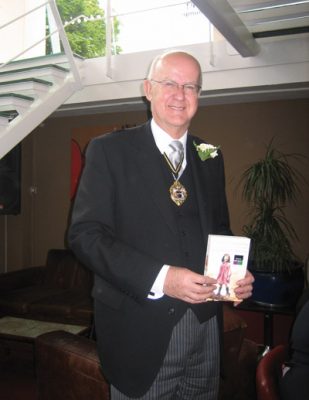 The Lord Mayor of Birmingham, Councillor Randal Brew and his wife Sandra attended the most recent JQA Breakfast and it was a surprise to hear that they have had a business in the Jewellery Quarter since January 1993. We asked him to write a short message for our readers:

“When my accountancy practice, Randal Brew & Co., first opened its office in Vittoria Street in January 1993, one of the long standing business owners told me that it wasn’t right for professional businesses like mine to be based in the Jewellery Quarter, he believed it should only be those connected with the trade. At that time there were many unused, often derelict, buildings and lots of workshops and offices to rent.

I’m not sure, at that time, I managed to convince him that the Quarter needed to open its doors to those who wanted to play a part in its regeneration and conserve its great history but as the years passed he and I were always on good terms, despite our rocky start.

I’m also delighted to say that eventually he became a client of ours when he found we could provide a better service than his highly priced accountant based in the city centre!

As the business grew we were always convinced that the Jewellery Quarter was the place to be. We’ve seen the development of the area, marvelled at the patience and tenacity of Marie Haddleton as she’s fought for various parts of the Quarter’s heritage to be preserved and believe that there’s no better place to work.

Today, it’s pleasing to note that the Quarter has fewer vacant properties and, whilst there may be more professional firms in the area, businesses connected to the jewellery trade are still alive and well.”