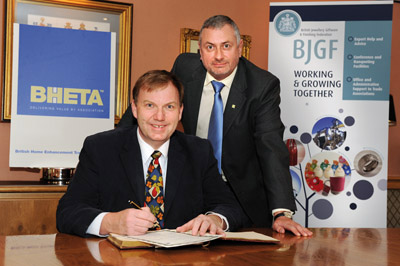 David Doyle, president of BJGF Federation (left) and David French, CEO of BHETA signing the historic agreement at the BJGF’s headquarters in Hockley, Birmingham on 1st May, 2009.

David Doyle, president of the British Jewellery Giftware and Finishing Federation (BJGF Federation) and David French, chief executive officer of the British Home Enhancement Trade Association (BHETA) have signed a formal ‘Heads of Agreement’ document which will bring together two of the most powerful trade associations in the United Kingdom.

The new ‘super’ Federation will have a combined membership approaching 3,000 member firms ranging in size from blue-chip PLCs through to individual designer makers.

Under the Terms of Agreement signed at the beginning of May, 2009, the two bodies, which will both now be based at the BJGF’s existing offices in Birmingham, agree to work together to pursue commercial opportunities to the benefit of all member firms and to enhance their trading opportunities and platforms.

“This signing marks another important step forward in creating a new and more powerful body, with greater resources and buying power than has previously been the case,” says BJGF President, David Doyle.

Commenting for BHETA, David French said: “The current economic environment clearly shows the need for all pro-active participants within our market sectors to redefine what they do and how they do it and the current events support the strategic direction and decisions taken by the boards of BJGF and BHETA.”