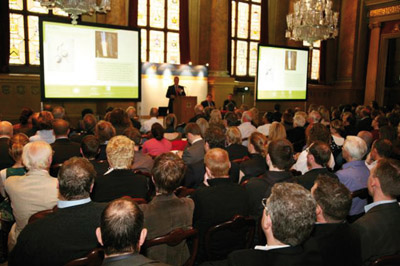 The Goldsmiths’ Company Assay Ofice London and Johnson Matthey Precious Metals Marketing hosted an informative technically focused evening on palladium as a new material on Tuesday 28th April. The event, held at Goldsmiths’ Hall, was attended by more than 200 members of the industry.

Until recently, palladium had only been used in jewellery as an alloy element, notably to bleach gold’s natural yellow colour closer to that of platinum.

Now this ‘new’ metal has started to gain attention as a jewellery material in its own right. However, as with any new material, there is a technical and commercial knowledge gap.

The technically focused evening aimed to ‘bridge the gap’ by assisting manufacturing businesses understand more about palladium and to take advantage of the opportunity it presents for today’s market.

Peter Taylor, Director of Training and Technology, who opened the event said: “We were delighted when Johnson Matthey approached us to collaborate with the re-writing of the Palladium Manual for the UK market.

This evening highlights the Goldsmiths’ Company’s unique ability to bring together education and commercial activities in one event. The input and contribution of Assay Office London has been invaluable in this regard. We are therefore looking forward to working with them on future events that highlight their technical expertise and knowledge, which extends beyond hallmarking services.”

In addition to the technical content, Dr Robert Organ, Deputy Warden gave an update on the much awaited palladium hallmark, which should come in to force in July, with compulsory hallmarking of palladium items weighing 1g or over commencing 1 January 2010.

It was evident from the subsequent debate that the addition of palladium to the Hallmarking Act 1973 is very welcome. Each attendee of the event received a complimentary Palladium Technical Manual, launched at the event, which had been anglicised for the UK by Johnson Matthey Precious Metals Marketing in conjunction with The Goldsmiths‟ Company, Cooksons Precious Metals and H.S. Walsh. The comprehensive new technical palladium manual is full of expert advice (on CD) and is available now from Johnson Matthey Precious Metals Marketing.

(Palladium is named after the asteroid Pallas, which was discovered around the same time).