City planners have unanimously approved proposals for the biggest development in Birmingham’s Jewellery Quarter for more than 200 years. Developer Chord Deeley’s £160million St Georges scheme, which includes new office space, homes, hotels, shops, a multi-storey car park and a new public square – only the second in the historic Jewellery Quarter – also got the thumbs up from the City’s Conservation and Heritage committee.

Around 2,500 new service sector jobs will be created as a result of the ambitious development, which will boast more than 262,000 sq ft/79,858 sq.m of new office and retail accommodation.

Construction of the office development and the square will kick-start work at the 2.75 acre/6.8acre site, which is bounded by Icknield Street, Camden Street and Carver Street. The site also incorporates Moreton Street and Pope Street, where the square will be located. 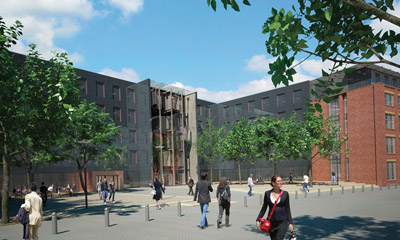 Phase one will include the £55million conversion of the Kettleworks, the former Swan kitchenware factory, into office and retail space.

Although the building, which dates back to 1900, is not listed, Chord Deeley has opted to retain the red-bricked landmark. A new storey will be added to the existing four and a 1950s extension will be extensively refurbished to complement its Victorian parent.

The Kettleworks will provide 220,000 sq ft/20,438 sq m of BREEAM excellent office accommodation, with single floor plates of up to 50,000 sq ft. A further 42,000 sq ft/3,902 sq m of retail/leisure space will be available on the ground floor of the building, fronting the new public square.

Office space is available at £15 per sq ft/£161 per sq m, filling a major gap in the market for large, affordable floor plates close to the city centre. A life cycle cost model has also been undertaken and indicates that, at £1.75 per sq ft per annum, the building will be very economical to occupy.

An adjacent 1950s warehouse will be transformed into the multi-storey car park and will provide 323 spaces for cars, 38 motorcycle slots and 130 bicycle spaces for the Kettleworks.

At 60m x 50m the new public space is equivalent to Brindley Place’s Oozell’s Square. As well as providing an area for visitors to meet and relax, it is intended that the square will be used as a venue for craft markets and outdoor performances. A planting programme will also introduce trees to the area.

Clive Dutton, director of planning and regeneration, Birmingham City Council, said: “The Jewellery Quarter is one of Birmingham’s prized possessions. Major development on the scale proposed by Chord Deeley has not been seen in the Quarter for more than two centuries. “We welcome the St Georges scheme as it will greatly improve the industrial fringe of the Jewellery Quarter, as well as bringing much-needed new jobs to improve the vibrancy of the area. It will also encourage additional investment and regeneration.

The development will also create new public space in the Jewellery Quarter. This is a major bonus, as St Paul’s Square and the cemetery on Warstone Lane currently provide the only open space.”

Peter Deeley, chairman of Chord Deeley, said: “There has been huge local support for our proposals and we are thrilled to have received the unanimous green light from the council. As a developer we are very excited about delivering new public space within the Jewellery Quarter as well as providing office accommodation for up to 2,500 new workers to the area.

The neighbouring B1 development has already set a precedent for bringing new service sector jobs to the Jewellery Quarter: more than 1,000 people are employed there, establishing the area as an extension to the city centre office core. By providing big floor plates at affordable rates to Grade A standards we intend to emulate their success. The Jewellery Quarter’s transport connections, including its station, two Metro stops, major bus routes and not least being just ten minutes walk from the city centre; make it a first class choice for large employers.

St Georges is hugely significant for the Jewellery Quarter. It will change the economy from one which has traditionally been over reliant upon crafts and arts to one which can accommodate workers from the growing services sector.”

Chord Deeley is currently tendering the contract for the demolition of a two storey 1970s former glass works and a number of disused post war factory units which form part of the site. The developer hopes to commence these works by the end of June.

Further development of the site, including additional office space, hotels and residential accommodation, will be phased over the next 3-5 years.

Hi i was wondering if you could help, i am very interested in the jewellery quarter as i have trace family back to here.
Do you know of any job opportunities in this area?
I am very interested in the preservation of buliding graves and geneology and the history of the jewellery quarter as a whole.
If you know of any opportunities particularly the Museim,art gallery etc please could you let me know
mr m randell