Home » People » Andy Munro – A Fond Farewell but Not Goodbye 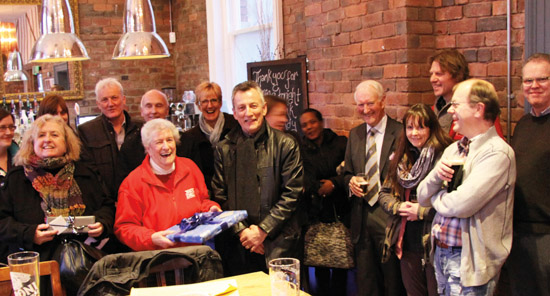 When writing about Andy Munro it is difficult to find schemes and events that he has not been involved with rather than those he has! I have picked out some of these events from past issues of The Hockley Flyer but apologise if have missed anything.

The first record we have of Andy is 1998 when he was appointed Jewellery Quarter Animateur and shared an office with ‘Design Gap’ in The Big Peg, having previously been Leader of the Newtown and Ladywood Task Force.

In 2000 he helped organise the Jewellery Quarter Festival (first of several) and later the JQ Management Group was formed with Peter Taylor in the chair. Andy was part of that group, the main object being to divide the Quarter into areas of use, then later, the EDU Property Management group was set up in Anvic House with Andy as manager, funded by Groundworks.

In 2002 the name ‘Urban Village’ was dropped altogether and changed to ‘Jewellery Quarter Regeneration Partnership’ and Andy became its Operations Director, moving into No. 57 Frederick Street, employing several members of staff and with a separate meeting room which could be used free of charge by groups operating in the area. 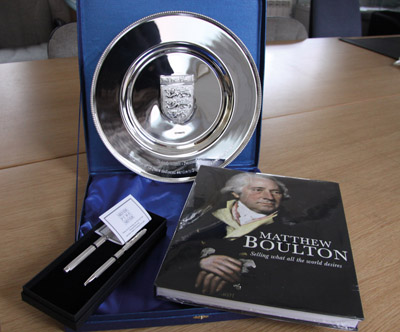 The JQRP booked a monthly Newsletter in the Hockley Flyer, written by Andy, to keep everyone up to date with news.

At this time the various groups in the Quarter worked separately but also joined together on important issues affecting the Quarter and each group was represented at the JQRP meetings – (Andy had taken over and provided free secretrial back-up and meeting space for the various teams originally started by the JQA which ‘saved’ the Association a great deal of time and money).

He also organised Designer/Maker Forums and produced various directories etc, including of course the Essential Guides, working in close co-operation with the Advertising Fund (which he helped to set up in the first place, later being renamed the Jewellery Quarter Marketing Initiative).

Through Andy the Jewellery Quarter was involved with ‘In Bloom’ and won several awards, Christmas Lights and Santa Races, etc. schoolchildren planting bulbs in St Paul’s churchyard, getting the Cemeteries Group going, The Pen Room and the JW Evans museum and the Coffin Works.

Also, of course, the two Trails and the various pieces of artwork around the Quarter. If there was a problem in the Quarter, you only had to contact Andy’s office, (including pot-holes), and he was always involved with parking issues and promoting the Quarter.

I reckon we should also take this opportunity to say a special ‘thank you’ to Mary Bradley who has done such a wonderful job in running the Visitors Kiosk (a present from HRH Prince Charles) over many years, winning an award in the process, With the knowledge that the Kiosk could be demolished at any time, Mary’s future in the Quarter is uncertain. Andy, together with the JQA) has been involved over the years with every ‘re-opening’ of not only the Visitors Kiosk but also the Police Station and even keeping the The Museum of The Jewellery Quarter open after the Council decided to close it down during the winter months!

A little ‘farewell’ party for Andy was held on Thursday 21st February in The Virtu Bar which was well attended and he was presented with several gifts, all organised by Anna Gibson who has worked so closely with Andy over the years.

The Silver ‘plate’ was engraved: ‘To Andy Munro. February 2013. In recognition of 12 years dedicated service to Birmingham’s Jewellery Quarter.’
Andy tells us it has “pride of place in his lounge.”

This was subscribed to by Andy’s friends and colleagues in the Quarter and presented by Marie Haddleton (past Hon. President/Hon. Secretary of the JQA, Leader of JQ Heritage and Editor of The Hockley Flyer).

The silver pen was from Andy’s friends and colleagues from within the City Council. Cllr Kath Hartley made the presentation on their behalf.
The book (‘Matthew Boulton’) was a momento from The Assay Office in acknowledgement of Andy’s contribution to the Jewellery Quarter and was presented by The Assay Master, Michael Allchin.

I don’t reckon we have seen the last of Andy however, because, as I have always said: “If you have lived or worked in The Jewellery Quarter, it’s as if a piece of elastic is attached between you and the Clock and every time you try to escape, something pulls you back again!

About B.D.G. Manufacturing Ltd
www.gainsboroughsilver.co.uk
B.D.G. Manufacturing was set up in 1939 and was originally called Swatkins & Turvey. In 1941 the Company became limited and changed its name to William Bayliss and Sons Ltd. The Company has moved twice since its initial base in Mary Street, but is still located in the heart of the Jewellery Quarter.

The business is now a manufacturing based silversmiths and sells its premier quality silverware under the name Gainsborough, which can be found gracing the tables of some of the most famous hotels, cruise liners and restaurants in the world, including The Peninsula in Tokyo, Raffles in Singapore, The Orient Express, The QM2, the Queen Victory and The Savoy in London.

The Company has produced some famous awards over the years including replicas of the 1904 original FA Cup commissioned by David Gold, Chairman of Birmingham City Football Club, the Professional Football Association Awards and more recently winning a 5 year contract to supply the Isle of Man TT Awards.

The gift presented is a fine example of their craftsmanship and engraving in quality silver.

About L J Millington
www.ljmillington.co.uk
L J Millington are specialist manufacturers of English Silverware. They are an established family owned business and have been trading successfully since 1966 in the Jewellery Quarter when Leonard J Millington founded the company. Their highly skilled craftsmen have, between them, over 200 years experience in the silversmithing trade.

LJ Millington design, manufactures, and stock a wide range of high quality sterling silver products; they can also create pieces to customer’s own specific designs. They purchased a Birmingham Manufacturing Silversmiths and have now successfully incorporated a wide selection of their high quality pens, pencils, toothpicks, and corporate gifts into their range.