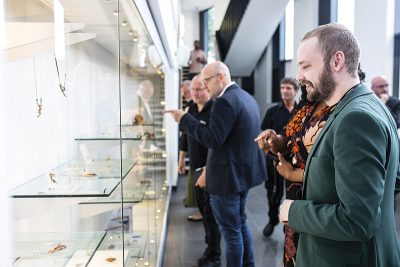 The British Academy of Jewellery is excited to announce the names of the students who won awards at its Birmingham campus’ Final Show 2022 opening night. Hosted at the Birmingham Assay Office, where BAJ’s Birmingham campus is also located, the Final Show launched with an array of jewellery produced by some of BAJ’s most talented jewellery diploma students over the past year. The awards ceremony featured a total of six awards and nine prizes ranging from hallmarking registration to work experience to tools, stones, and vouchers.

The Weston Beamor Excellence in Design Award, judged by Andrew Morton and Kerry Saunders, was won by Kate Bell with Omaree Raynolds as runner up. BAJ’s Most Improved Student Award, chosen from Tutors’ recommendations, was awarded to Lauren Smith.

The Final Show opening night was attended by BAJ staff and students as well as key jewellery sector figures from Birmingham and beyond. The event also highlighted the vibrant jewellery industry based in and around the Birmingham Assay Office, with which our students forge strong connections.

“BAJ is committed to guiding our students to produce their best work and celebrating their achievements with our wider community,” said BAJ Principal Sharjeel Nawaz. “Our students have achieved high standards of technical jewellery manufacturing and innovation in design which they showcased to top names of jewellery on Tuesday. I am exceedingly proud of the hard work our Birmingham students have put in over the past year and the recognition which they have received from both the local and national jewellery industry.”

“It was great to see our L3 and L4 learners engaging with our industry guests and showing off their work to friends and family at last night’s Final Show,” said Birmingham Team Lead Miranda Sharpe. “We’re really proud of the high standard of work achieved by all of our students, the level of skill they have developed in 12-24 months of study is really impressive! Using the words of one of our guests, achieving a balance between good design that is also commercial and made well is a real skill and was evident in the work on display.”

“I’m over the moon, absolutely elated,” said BAJ Diploma student Jordan Moss on winning. “It’s just good to feel like I’ve been working and working and now I’m seeing the fruits of that. It’s nice to feel recognised for the work that I’ve done, it’s really nice.”