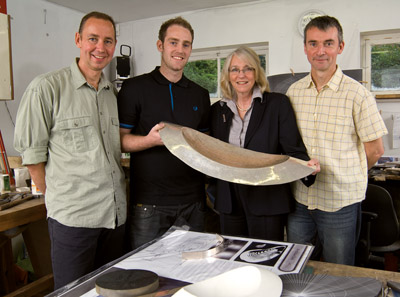 The Goldsmiths’ Company’s annual Young Designer Silversmith Award competition has been instrumental in launching the careers of several of the country’s top artist silversmiths during its sixteen year history.

The Award scheme was started in 1994 by Rosemary Ransome Wallis, Curator of the Collections at Goldsmiths’ Hall as an initiative to encourage students to show their artistic individuality in silver.

“The rationale behind it was to encourage studio silver design”, explained Rosemary, “with the combination of a competition for excellence of design and an opportunity to perfect dexterity of craftsmanship being at the heart of the scheme.”

This year’s award winner is Ben Ryan (22) of Welwyn Garden City, who at the time of being chosen for the award was a post-graduate student at Bishopsland Educational Trust.

The Young Designer Silversmith Award is open to any student, under 30, in the UK on an approved BA, MA Honours or equivalent course. To enter candidates have to submit a presentation drawing and model of their design in wood, plastic or metal which answers the requirements of the chosen brief which changes each year. This year’s brief was to design a presentation dish suggestive of coastal environments and their rich edible sources. 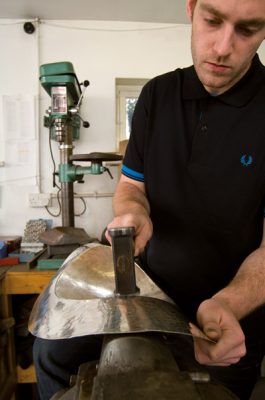 The winning young silversmith is subsequently awarded £4,000 which goes towards the cost of translating their design into silver in the workshop of a leading silversmith as designated by the Goldsmiths’ Company.

The resulting silver piece is then presented by the Goldsmiths’ Company to an appropriate national museum, to join its permanent collection of contemporary decorative arts. The ultimate cherry on the cake for a young silversmith embarking on their career! In addition they receive a bonus of £500 for personal use and free registration for Hallmarking at the London Assay Office.

This year’s winner Ben Ryan chose to design a dish for mussels which he has called Mytilidae, the Latin word for the family of small salt water mussels. The resulting design, in silver, is not only impressive but makes visual reference to this theme. Ben explains: “The curved shape of the dish is reminiscent not just of the mussel itself but also the shallow coastal tidal pools where the mussels can be found.”

Silversmiths Carl Padgham and Andrew Putland, based in their workshop at Pluckley in Kent agreed to guide Ben through the process of making his ambitious design. The start of the piece was an extremely large flat sheet of silver (blank) – one of the largest ever handled in the workshop measuring 750 mm x 380mm and with a thickness of 1.3 mm. Carl Padgham demonstrated to Ben how to control such a substantial blank of silver in order to successfully raise it.

Ben said: “With hindsight my design was quite ambitious, particularly as I had never hand-raised anything on that scale before, so it was quite daunting being faced with the challenge of turning my design into a reality. It was two months of solid hammering which was both physically and mentally exhausting. But I am really very pleased with the outcome and my raising skills have improved dramatically!”

The mussel dish was then polished and parcel gilded in lemon gold by outside specialists. The finished piece measures 700mm x 300mm and weighs 2710g. Carl Padgham who mentored Ben was duly impressed at how quickly Ben had grasped the techniques and in a short space of time had hand raised, sunk and planished the piece to realise his design and create what is a spectacularly magnificent dish. Carl concluded: “Ben is definitely a rising star to watch.”

Rosemary Ransome Wallis agreed “Ben not only translated the brief with his innovative design, but the finished piece transcended it.”

Ben joins a distinguished list of past winners of this prestigious award, among them Shannon O’Neil, Marion Kane, Sidsel Dorph-Jensen, William Lee and Theresa Nguyen all of whom are now well established in the top echelon of British silversmiths. Shannon, who won the award in 1995, said: “I couldn’t have wished for a better start.

To be given the opportunity to work alongside the very best silversmiths in the country to help realise my design was just the beginning!” This feeling is endorsed by Theresa Nguyen, winner in 2005; “The guidance and encouragement from highly skilled craftsmen gave me the competence and confidence required to take on challenging silver commissions, and the achievement of having made a significant silver article for the permanent collection of a national museum is truly gratifying.”

In a ceremony which took place on Thursday November 25, in the Court Room of the National Museum of Wales in Cardiff the current Prime Warden of the Goldsmiths’ Company, Mr Michael Galsworthy congratulated Ben on his outstanding achievement and handed him his winner’s certificate and cheque. He then presented Ben’s mussel dish to Mr Mike Tooby, (Director Learning, Programmes & Development) acting on behalf of the Director of the National Museum of Wales.

Mr Oliver Makower, Director of Bishopsland Educational Trust, was also presented by the Prime Warden with an engraved Young Designer Silversmith commemorative plaque, bearing the Goldsmiths’ Company’s coat of arms, which will be retained at Bishopsland for one year. The judges of the Award, as well as silversmiths Carl Padgham and Andy Putland, were all present to witness the event.

Ben has every intention of continuing to make his mark as a silversmith and is setting up his own workshop and retail outlet in his home town of Welwyn Garden City.