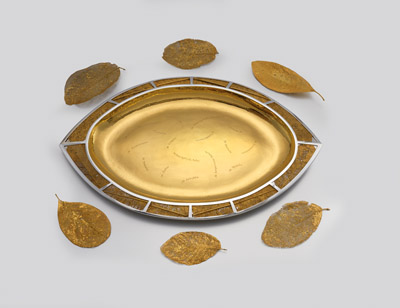 A stunning silver and silver-gilt centrepiece recently completed after months of painstaking work by silversmith Richard Fox takes its inspiration from rare magnolia trees and in particular its leaves.

The centre-piece was commissioned by Michael Galsworthy, Prime Warden of the Goldsmiths’ Company and Vice Lord Lieutenant of Cornwall, for the dinning-table at his Cornish home, Trewithen.

Aside from being one of the most elegant examples of 18th century architecture in Cornwall, Trewithen is famous for its gardens which boast many magnificent rare magnolia blooms.

Michael Galsworthy decided some 18 months ago that he would like to commission a contemporary British silversmith to make a substantial silver piece to commemorate his year as being Prime Warden of the Goldsmiths’ Company.

With help from the Company’s Curator Rosemary Ransome Wallis, Michael Galsworthy decided upon Surrey based silversmith Richard Fox. A winner of many design awards, Richard Fox is known for his extremely sleek, minimalist silver and is particularly renowned for his motor racing trophies.

The focal point of the commission was to be the natural form of the magnolia leaf in its decayed condition, which, with its skeletal veins, is a form of great delicacy and beauty. 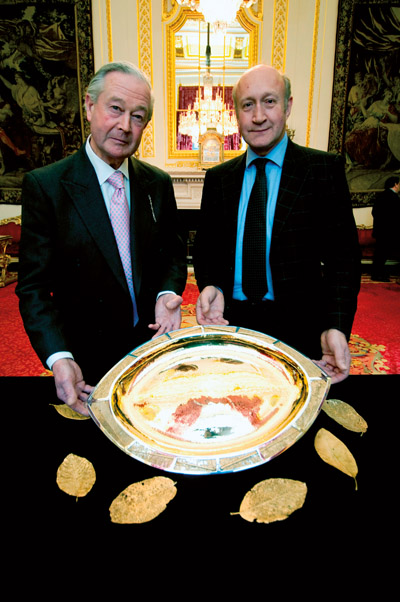 After considerable discussion it was decided that Richard would design and create a leaf-shaped centrepiece with additional individual silver-gilt leaves that could be placed randomly down the table, thus continuing the theme and providing an attractive visual link.

The large centrepiece was to be both striking and graceful, in addition to incorporating natural elements in the form of pure silver electro-formed real leaves. “This was the real challenge” said Richard, “as magnolia leaves are so large and fragile.”

After much experimentation Richard developed a very low dish form, marquise shaped on the outer rim representing the tips of the magnolia leaf and oval on the inside to reflect the ovular nature of a leaf.

Impressive in size, the centrepiece measures approximately 660mm x 400mm and weighs some 6kgs, and has twelve rectangular panels pierced into the rim, each one incorporating silver gilt sections of real leaves.

To heighten the effect, the Latin names of 16 magnolia species found in the gardens at Trewithen are engraved in swirling patterns on the pure gilded, planished interior of the dish.

At every point, particularly at the conceptual stages of the commission, Richard produced sketches, plans and elevation drawings for Michael Galsworthy to see and together they were able to discuss and refine the concept to its final design.

Richard said: “It is always extremely important that the client feels very much part of the whole design and making process. I produced samples of leaves in different finishes so that Michael could appreciate the varied tonal qualities against a range of backgrounds and he regularly came to the workshop to see the piece take shape and witness some of the silversmithing.” 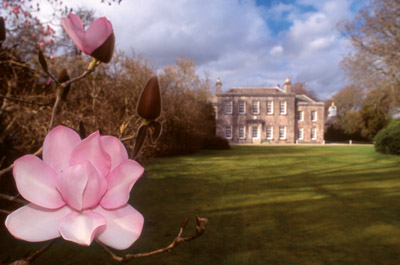 >Even for a master-silversmith with years of experience, Richard found his silversmithing skills tested. “Quite aside from the physical toll of making a piece of this size and weight, it was technically extremely challenging.” However all the challenges were overcome and the resulting dish, with its rich, opulent gilding, is a triumph and a worthy celebration to the magnificent magnolia.

Michael Galsworthy said: “The commission is all that I hoped it would be and I am absolutely thrilled. It is a stunning visual testament to Richard’s incredible silversmithing skills.

The whole process from start to finish was an exciting and enjoyable journey of discovery and enlightenment. I feel very proud to have played a part in the creation of this wonderful silver masterpiece which I know will be enjoyed my family and future generations for centuries to come.”