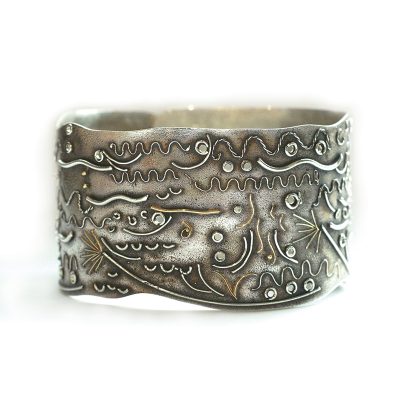 As the summer heatwave becomes a distant memory and autumn fast approaches, a Birmingham jeweller has crafted a bangle that celebrates the sunlight.

“This heavily textured silver bangle with 18ct gold detail is an individual and handmade piece, which reflects the sparkle of sunlight on water with its circles and rills, sprinkles and waves,” says Michele White, who will be exhibiting at Milan Jewellery Week from October 23. “There is no solder involved in the making as all editions are fused on. The hole is oxidised and then polished to remove most of the colour and bring back the high polish of the silver. The back is left open to accommodate different sizes.”

Earlier this year Michele visited Norway, and this has inspired her to produce a second bangle, Northern Lights. This is again a handmade silver bangle with 18ct gold detail. “The Northern Lights move and swirl constantly as the air move around you,” recalls Michele. “The gold wires that are fused on highlight the movement and the textured background surface is reminiscent of the night sky. The hole is oxidised and polished to remove most of the colour and bring back the high polish of the silver. The back is left open to accommodate different sizes.”

After 35 years working in a draughty room, in a tumbledown Victorian factory building in Birmingham Jewellery Quarter the opportunity occurred for Michele to move to a newly refurbished building just half a mile away. “I now make my work in a basement beneath my own road facing gallery,” she says.

The gallery is a large space and as jewellery is so small, Michele curates’ pieces made from wood from about 40 different makers from around the UK. 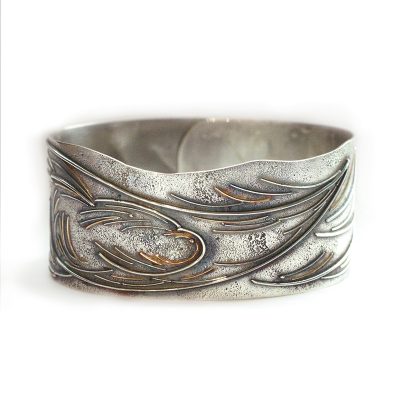 “Jewellery is my third career if you count staying at home with three small children a career. My first was as an art teacher which morphed into teaching autistic children. Once the children were at school, I wanted a more creative outlet and jewellery happened by chance…. after all I was in Birmingham, the origin of the industrial revolution and the jewellery making industry.

At the jewellery school (now BCU) in the Jewellery Quarter I was considerably older than the other students and for that reason was not taken seriously. Consequently no one thought I was worth teaching and I was left to myself. I developed my own techniques for building my pieces which I have spent the next 40 years developing and am still doing so.

Trees have been an integral part of my artistic practice since my first pieces made as a student. The first piece featured a weeping willow which still stands in a neighbouring garden.

Over the years I have frequently used agates, which have large transparent areas and inclusions which look like landscapes. There are others such as jaspers and opals which also lend themselves. While at college I also studied gemmology due to my love of gemstones and using them in my work. Sometime when lockdown eased, I visited the Victoria and Albert Museum and wondered why I had never made bangles.”

Later this year Michele will be exhibiting four pieces at Milan Jewellery Week, two pieces with gemstones, which should have been exhibited last year and two bangles, one design based on water, and the other based on air.