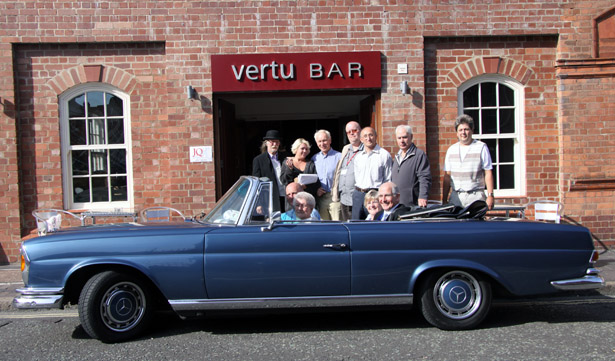 Birmingham’s Deputy Lord Mayor Cllr Len Gregory and his wife Gill attended and in his opening speech he stressed how important it was to conserve the many listed buildings whilst bringing the derelict buildings back into use and, of course, encouraging job creation to sustain the inherent skills which continue to make the area famous.

He said they had both visited the Jewellery Quarter many times over the past few years but had not as yet been able to view the Kathleen Dayus sculpture in Dayus Square. The owner of a vintage open top Mercedes (Simon Bland of St Paul’s Gallery) offered to chauffer them and, accompanied by Marie Haddleton (Jewellery Quarter Heritage) they drove off in style.

They have also published ‘The Jewellery Quarter History & Guide (Nos 1 & 2) and The Hockley Flyer, the local magazine, which has been in existence for nearly 30 years. Marie founded the Jewellery Quarter Association Ltd 23 years ago until her resignation as Hon. President/Hon Secretary this year. Mark was a Director and Treasurer until his resignation.

There are many schemes on the JQH agenda and, judging by the reception so far, there are busy times ahead.

The most popular post at the moment on The Hockley Flyer web site.

It is good to see that such a great organisation has been launched. I was looking around the Jewellery Quarter area at the weekend and noticed just how many premises were empty, so was looking to find out what was happening to counter this in the area. I would love to get involved in some form.

This website uses cookies to improve your experience while you navigate through the website. Out of these cookies, the cookies that are categorized as necessary are stored on your browser as they are essential for the working of basic functionalities of the website. We also use third-party cookies that help us analyze and understand how you use this website. These cookies will be stored in your browser only with your consent. You also have the option to opt-out of these cookies. But opting out of some of these cookies may have an effect on your browsing experience.
Necessary Always Enabled
Necessary cookies are absolutely essential for the website to function properly. This category only includes cookies that ensures basic functionalities and security features of the website. These cookies do not store any personal information.
Non-necessary
Any cookies that may not be particularly necessary for the website to function and is used specifically to collect user personal data via analytics, ads, other embedded contents are termed as non-necessary cookies. It is mandatory to procure user consent prior to running these cookies on your website.
SAVE & ACCEPT
wpDiscuz
2
0
Would love your thoughts, please comment.x
()
x
| Reply