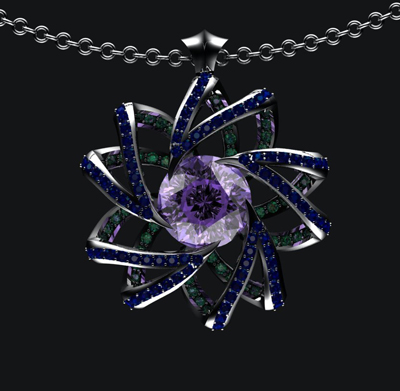 First prize – an all-expenses paid trip to Gemvision’s Design Symposium at its headquarters in Iowa – went to Alexander Davis of Alexander Davis Jewellery for ‘Best Render’.

Both have been invited to take their Matrix design skills to the next level at Gemvision’s Matrix Masterclass hosted by Ken West, Gemvision’s head of technology in January 2013.

“We had a fantastic response from jeweller designers UK-wide, the judging process was made even more difficult with so many stunning and innovative designs to choose from,” said Graham Dicks, manager of Gemvision’s UK operation.

He commented: Alex’s pendent presented true individuality and his outstanding design concept made him a worthy overall winner. He will join some of the world’s top jewellery designers at the next Gemvision Design Symposium in October.”

All the designs can be seen at: http://pinterest.com/gemvisioneurope/gemvision-uk-jewellery-design-comp