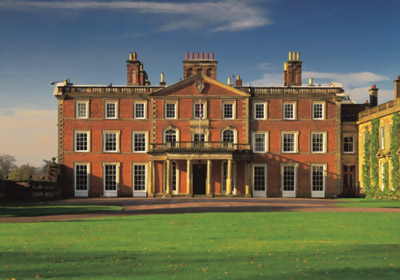 The 122nd British Jewellery Giftware & Finishing Federation AGM will open for business at the spectacular 17th century ancestral house of the Earls of Bradford – Weston Park, Stafford – on Thursday 5 June 2008, with the enigmatic guest speaker, the TV and radio presenter and all round entertainer Don Maclean.

The BJGF Federation’s AGM at Weston Park, follows in the footsteps of the illustrious G8 Summit held at the same venue.

It is the second consecutive year that the Midlands has been earmarked for one of the industry’s key calendar events with the 2007 AGM staged in Birmingham, where many of the industries represented by members are based.

BJGF Federation President, Linda Evans, has worked tirelessly to promote the Jewellery Quarter in Birmingham during her time in office and will pass the reigns of the presidency to David Doyle, of Jewellery Brokers, who has been on the BJGF Federation’s Board of Directors since 2002.

Linda Evans will become Deputy President for 2008/09 whilst David Metcalfe, formerly the Chairman and Managing Director of EmapTPS, will become the new Vice President.

The four largest Federated Associations (the GA, BJA, SEA and BTAA) will provide a fascinating insight into the progress and achievements of each sector during the past 12 months. They will talk about how they have counter-acted and responded to the slow down in the economy, whilst highlighting key political and reform achievements in each of the industries represented by the Federation.

As the current President Linda Evans, said: “So much has been achieved by the Federation, against the backdrop of a more challenging economic picture, and the AGM will be a once-in-the-year opportunity for members and non members to connect and network with the six core industries represented by the Federation. The spectacular setting and dynamic guest speaker will make it a real highlight in the industry’s calendar.”

Solihull-based Don Maclean, who has entertained the nation over four decades will step up to the microphone to provide the audience with a witty analysis of the industries represented by the Federation, and his observations of the Midlands, before guests sit down to a stunning three course lunch.

Each member company of the Federation automatically receives one free ticket and additional members of the BJGF Federation and non members are welcome to purchase a ticket for this fabulous day at just £35 (exc VAT). Contact: Jodie Howard on 0121 236 2657.