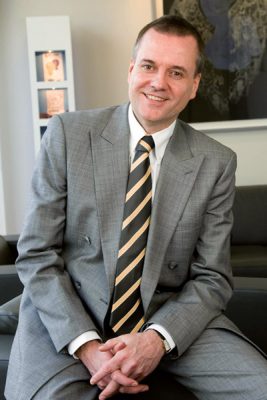 Andrew Morton, the recently appointed managing director of Weston Beamor Ltd has signalled his desire to expand the company and to grow its sales both in the UK and overseas.

Morton comes to Weston Beamor, which celebrated its 60th anniversary in 2007, after eight years at Helix Lighting, the last four as Managing Director, where he managed to move forward the fortunes of this strongly design-led lighting supplier.

He is however no stranger to the jewellery trade having previously held the post of Operations Director at G&A in Birmingham.

In his new post Morton will take overall responsibility for the running of both companies within the Weston Beamor Group. These are the casting house and CAD service provider, Weston Beamor and the jewellery component supplier Domino, both of which operate from the group’s headquarters in Birmingham’s Jewellery Quarter and between them employ a total of 125 staff, making Weston Beamor one of the largest jewellery employers in the UK.

“My task is to head up the next phase in Weston Beamor’s development,” says Morton. “We have recently opened a brand new office and boardroom suite on the 2nd floor of the building, in previously un-used space, and have created some 3,000 sq ft of additional working floor space for the business.

Much of this will be devoted to expanding our New Product Development department and increasing the manufacturing area which we see as being pivotal to our on-going success. Our recently opened trade counter in London is also proving popular and is also set to expand.”

Morton believes, despite current gloomy predictions, that there is still plenty of room to increase Weston Beamor’s sales in the UK and is also looking forward to developing further the company’s export markets in Europe.

“I am pleased to have joined a company which has such a successful track record and is so widely respected within the jewellery trade. I am delighted to be a part of the team and look forward to working with my fellow directors and staff to maintain Weston Beamor’s place as one this country’s, if not Europe’s, most innovative and exciting jewellery and jewellery castings suppliers,” he says.