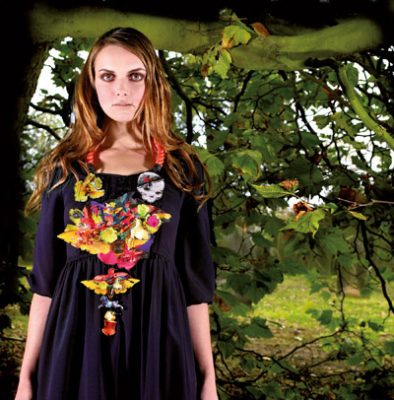 Since 1999 when a group of local designer makers gathered together to promote themselves and their work under a single brand the event has grown into an international contemporary jewellery festival attracting designer makers across the globe.

In its celebratory year, the programme includes two exhibitions at Birmingham Museum & Art Gallery – FLUX, the annual selling show which attracts international entries from new and emerging designers, and a Tenth Anniversary Retrospective featuring the work of seven designers whose work has headlined previous festivals.

They include this year’s profile designer Mikaela Lyons, whose own surreal illustrations inspired by old travel photographs are digitally manipulated to form the base for a number of colourful body adornment pieces and smaller scale jewellery.

They are mounted onto oxidised copper settings and covered in laser cut acrylic to create fashionable, high impact and theatrical pieces.

Freelance designer and recent MA graduate from the Birmingham School of Jewellery (BCU), Mikaela said: I was really surprised and so excited to have been chosen as the profile designer in Brilliantly Birmingham’s tenth year. As a student I was always inspired by the nature of the work on show at past Brilliantly Birmingham exhibitions and to have my work included in this special year on all of the anniversary posters and brochures is a real honour.”

Also featured in the Retrospective are Kathryn Marchbank (UK) Betty Pepper (UK), Lisa Juen (Germany/China) Anke Plath (Germany), Vaishali Morjaria (Kenya) and last year’s profiled designer Sally Collins (UK). Since their early involvement with Brilliantly Birmingham as students many of the designers have gone on to forge successful international careers with their work represented in galleries around the UK and abroad.

The festival has its roots in Birmingham’s historic Jewellery Quarter a designated conservation area which employs around 4000 people and is home to more than 80 contemporary designer makers, not to mention historic firms that have been trading for hundreds of years.

There are also bullion dealers, toolmakers, gem setters, the Birmingham School of Jewellery (part of Birmingham City University), The Birmingham Assay Office and the Museum of the Jewellery Quarter – the former Smith and Pepper factory left in a time-warp by its retired owners in 1981 and now a fascinating visitor attraction that reveals the area’s metal-working heritage.

Leader of Birmingham City Council Mike Whitby said: “Wherever you are in the world you will be likely to find a piece of jewellery, silver or metal ware that was made in Birmingham – from Royal regalia to ecclesiastical silver and gold as well as the most stunning contemporary jewellery.

Brilliantly Birmingham not only encapsulates the rich heritage of the City’s Jewellery Quarter and the City’s reputation as ‘workshop of the world’ but also helps nurture the new and emerging talent coming through our colleges and universities, ensuring that our heritage lives on into the future. In ten years the festival’s reputation has grown amongst the international design community and it is encouraging to see the level of engagement that it now receives from all over the world.”

This year’s Brilliantly Birmingham 2009 will also incorporate Paradigma, an international exchange between Birmingham School of Jewellery (BCU) and the Escola Massana, Barcelona and a series of professional development seminars sponsored by Business Link and The Birmingham Assay Office.

There’s a return of the ever-popular ‘Walks in the Quarter’ and the Open Workshops which provide a unique opportunity to see behind the scenes in the picturesque studios where designers and jewellers create their designs and even to commission an original piece of jewellery.

The festival will also include a number of associated events featuring exhibitions by individual designer makers such as James Newman (Jewellery Quarter) and Sara Preisler (Custard Factory) and a collaboration with Birmingham City University’s New Generation Arts 2010.